Hitbtc, one of the newer crypto exchanges looking to expand its offering, has just wrapped up voting for its next altcoin. Not surprisingly, Dogecoin came out on top.

Dogecoin will be added for trading on June 15 after getting 15352 votes, 3042 more than the runner-up, nxt. In third is the previously unheard of “GlobalBoost” cryptocurrency, which is currently ranked 111th in market cap, and worth $3060. 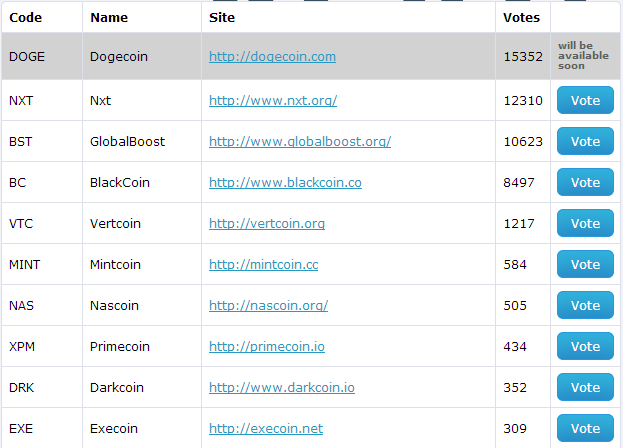 Surprisingly, Darkcoin didn’t even come close despite its torrid performance in the crypto markets and like Dogecoin a few months ago, showing signs of becoming the most popular coin. It came in 9th with only 352 votes.

The voting will continue to determine the next coin for addition.

Doge’s performance brings back memories of its relatively impressive debut on Vault of Satoshi. Within days after launching, Dogecoin dominated trading volume amongst altcoins.

Share this article
Tags: Exchanges
Got a news tip? Let Us Know

Thanks for very useful information about Dogecoin exchanges. Here is a tool to check Dogecoin Value