This guest article was written by Elisha Owusu Akyaw, a Contributor to the PIVX Project, and is sponsored by PIVX

Formerly known as Darknet, PIVX, a fallout of Dash after a dispute, is a private, instant and verified transaction based digital currency with a Proof of Stake (PoS) algorithm and community driven governance system (Community Designed Governance).

PIVX by its latest reforms has discharged the reliance on exhaustive resource hardware for mining that has a lot of consequences for the environment. A common analogy is the state of some PoW cryptocurrencies. Rather, members of the community earn PIVX by keeping their tokens in the network although connected to the internet. The network’s Proof Of Stake 2.0 algorithm permits every device to run a PIVX wallet, despite its technical designation or operating system to partake in the staking process and obtain rewards.

PIVX employs Bitcoin Core by default as it is a Dash fork.  Currently, it applies Bitcoin v0.10.x core in unification with some already dedicated v0.13.2 updates.  From January 31, 2016, since PIVX was launched, it has been the only PoS cryptocurrency to be based on Bitcoin Core v0.10.x or beyond, making it the utmost up to present and technically developed PoS cryptocurrencies in the industry.

In fact, it enjoys all the technical features of Dash, comprising the masternodes, instant transfers, and private transfers respectively. The team’s focus at the moment is working assiduously to enhance the platform by updating it to v0.12.1.x Dash core in order to improve peculiarities like IPv6 support, coupled with the existing IPv4 and TOR Network support.

With a block time of 60 seconds, PIVX has got a fixed block rewards which is handled by the Seesaw algorithm, a custom rotation algorithm consolidated in the system which efficiently reconstructs the remunerations split among a masternode and staking wallet. The complete information about the alternation algorithm is available in PIVX’s whitepaper.

Moreso, PIVX’s team, is among the first to investigate the roll out of Libzerocoin protocol amidst non-optional minting to the platform. When the integration of the zerocoin protocol is complete, it will additionally heighten the network’s privacy, ensuring every end-to-end transaction is untraceable. 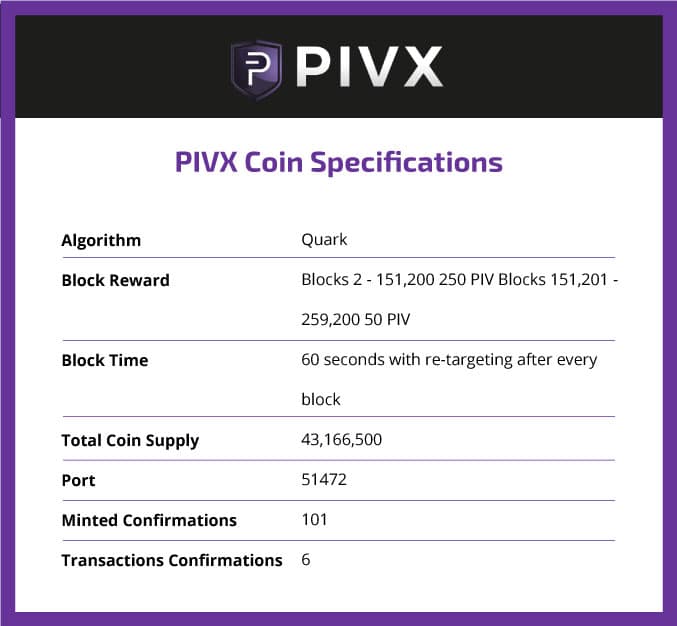 PIVX is dedicated to an all-inclusive governance by the community. The team is presently engaged in talks to considerably improve the existing master node voting system through inclusion of non-master node PIVX holders in the decision-making process and utilization of its block reward budget. One unique aspect is the discussions are held openly in lively meetings for elevated clearness until an ideal governance solution is agreed on and implemented.

Armed with these hallmarks, PIVX is poised to revolutionize the landscape of private cryptocurrency, in the sense of monetization and exchange methods.