This guest article was written by Steven Hey, a former futures trader and current writer for 99Bitcoins.

Warning: hard forks are complicated and unpredictable. Trading one without an awareness of the current state of play in Bitcoin, plus a thorough understanding of forks as they relate to blockchains, will likely result in loss.

Jokes about cutlery (and so on) aside, hard forks are a deadly serious matter for any cryptocurrency. If you’re new to software development and cryptocurrency, Andreas Antonopolous’ half hour “Forkology” presentation on YouTube provides an excellent explanation.

For further detail on the current situation in Bitcoin, this post by Meni Rosenfeld is recommended for its concise summary of a very complex situation.

There are two major points for traders to keep in mind regarding hard forks:

Forks aren’t unique to Bitcoin; any open source software project may be forked by copying then modifying its code in an incompatible manner. However, Bitcoin is unique in that it’s a software-based store of tens of billions of dollars in value. Such a massive and valuable project splitting into competing versions would be a momentous event, sending major shockwaves throughout the cryptocurrency space.

The combined value of multiple competing versions of Bitcoin is likely to be far less than the value of a single cohesive Bitcoin, at least over the short term. As an example, the value of Bitcoin’s nearest rival, Ethereum, plummeted when it hard forked in the past. Search news and social media archives to get a feel for the level of disruption at the time; it was extreme. Eventually the majority ETH chain did recover (and go on to make new highs):

As something more damaging than the Ethereum experience could be expected in the event of a Bitcoin hard fork, most Bitcoin participants are strongly motivated to prevent such an outcome.

Ethereum forked over the reversal of a large amount of ETH which got “stolen”. A relatively simple decision opposed by a small minority of dissenters. Any possible Bitcoin fork would likely represent failure to reach consensus on more structural issues, such as protocol upgrades. A more equal split could be expected, resulting in greater loss to both sides. Forks are ultimately a lose-lose proposition, with the “winner” being the side which loses the least.

Cryptocurrency is volatile and high risk at the best of times. The greater the odds of a fork, the more unpredictable and wild markets are likely to get.  Even if you’re experienced in trading volatile markets, it’d be wise not to transact or store bitcoins anywhere but your own wallet around the time of a hard fork. Your own Bitcoin wallet refers to a wallet to you have full control over and access to your private key.

All price volatility aside, trading during a hard fork is a high risk activity in itself; coins can easily get lost in the shuffle or exchanges could blunder and go bust.

Whether arising organically or pushed as part of a divide and rule strategy, hard forks are highly destructive to cryptocurrencies for a number of reasons:

Even the world’s largest Bitcoin bank, Coinbase, plans to suspend trading on its GDAX exchange should the UASF fork (detailed below) occur:

Given that the above dangers create a scenario akin to financial Mutually Assured Destruction, why is a Bitcoin hard fork even under discussion? There’s no clear answer; the situation is a snarl of competing interests. This mess indirectly validates of Bitcoin’s value – it’s clearly worth fighting for! – unfortunately this struggle also serves as a drag on Bitcoin’s advancement.

After due consideration and over 4.5 years of Bitcoining, this author believes The Bitcoin Core Development team is the only side worth backing. They’re undeniably the largest, most experienced and most accomplished group of developers, with the support of the majority of users and technical experts. Whereas many people can run miners, websites, and their mouths, the skills of the Core dev team are not so easily replaceable.

It must be said that the ability to produce cutting-edge mining hardware is also rare. That Bitmain, the leading mining hardware manufacturer today, has risen to dominate not only the production of Bitcoin mining hardware but actual mining too, is a testament to their business acumen and operational efficiency.

Bitmain have out-competed their rivals and, to the detriment of Bitcoin’s essential decentralization, established themselves as the major player. It now appears certain that Bitmain wishes to parlay its dominance in mining into control over development, which many fear will further entrench their monopoly.

Fork risk is generated primarily by the friction between these two spheres; a largely Western development group which strives to maintain Bitcoin’s unique value proposition and a highly-successful Chinese corporation driven by profit motives.

Fork Risks are Nothing New

Bitcoin XT was released in mid-2015 as the first in a long series of hard fork attempts:

While one might charitably assume some good faith (if naïve) efforts at an alternate scaling solution, the forker’s continual disregard for echnical data, thorough testing, sound development practice and the weight of expert opinion suggest less-than-pure intentions.

When taken together with the involvement of various bad actors and the support of Bitmain, as well as numerous malicious spam campaigns designed to solidify the case for a block size increase, it’s understandable that hard fork attempts are now regarded with suspicion and derision.

This bitter saga has led to the current, dangerous situation whereby a significant segment of Core supporters, initially opposed to any unnecessary hard fork, would be pleased to see the ‘malcontents’ either fall in line or fork off.

Without them, Bitcoin development may continue in peace and with restored decentralization, or so the thinking goes. Indeed, this love it or leave it outcome is exactly what the upcoming User Activated Soft Fork (UASF) aims to achieve.

UASF and the SegWit Soft Fork

Beginning August 1st, nodes running UASF (also known as BIP148) code will reject any blocks which don’t conform to the rules of the Segregated Witness softfork. This rather drastic step is intended to force stubborn miners to activate SegWit.

SegWit is Core’s combined scaling solution, bug fix, and protocol upgrade. It is highly desired by developers, businesses and users. The majority of mining power has thus far refused to implement it, likely because it eliminates their patented AsicBoost advantage and because they fear it will reduce their fee income.

AsicBoost is a specific technology implemented into Bitmain miners allowing them to improve their mining efficiency. 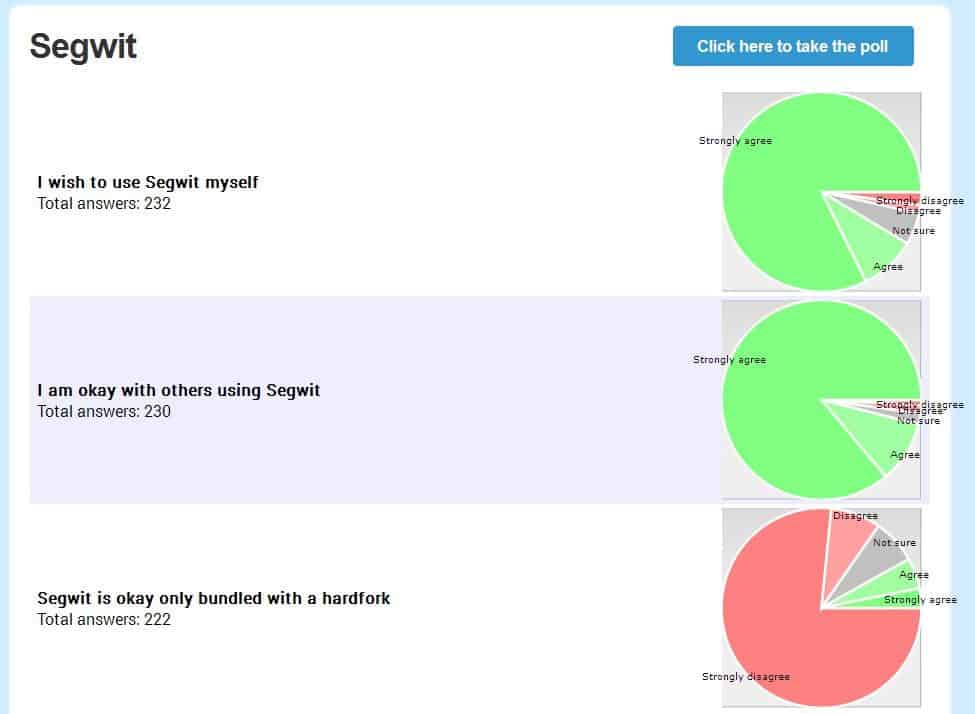 The number of UASF nodes is steadily rising, according to uasf.saltylemon.org: 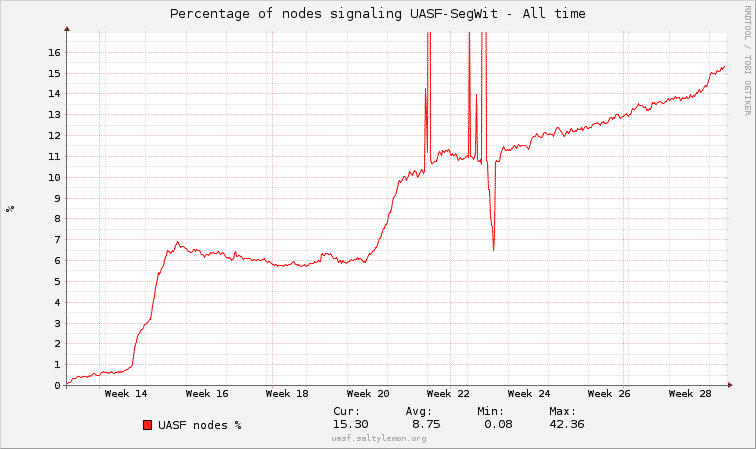 The UASF movement has prompted a face-saving response from the other side. Already revealed to be plagued by the same sloppy and rushed coding standards as Bitcoin Unlimited, Classic, et al, SegWit2x is something of a comprise(d) solution. It allows for the implementation of SegWit prior to UASF’s activation date, but also lays the groundwork for a 2 meg block size hard fork in November.

While a blocksize increase may well become necessary in future, the effective 75% blocksize increase provided by SegWit should provide ample short-term transactional capacity. Caution would dictate that the wider effects of SegWit (and the further upgrades it enables, such as Lightning Networks) be observed for longer than 3 months before contemplating another major change.

What’s going to happen next?

The most likely outcome is SegWit activation by August. In conjunction with nodes – particularly mining nodes – running (or least signaling) for either UASF or its compatible SegWit2x implementation, it appears probable at this juncture that SegWit will be approved come August 1st, obviating any potential hard fork.

However nothing is certain, so here are some general guidelines for the coming weeks:

Get your coins off exchanges and into a self hosted wallet where you have control over your private keys. If you hold your coins in an exchange you can’t tell how it’s going to handle the split.

Don’t receive or send any payments from the time of the split until things clear up. The uncertainty period is likely to be between hours and days, in which the behaviour of even the most recommended wallets is unpredictable.

Only invest in what you understand and believe in. Also invest an amount you can afford to lose. Turbulent times are ahead, with Bitcoin’s exchange rate projected to be even more volatile than usual.

This is a very dynamic issue. Even though it seems like a compromise was achieved there can always be changes. Check in with the different Bitcoin community social channels for the latest developments.

Share this article
Tags: bitcoin fork
Got a news tip? Let Us Know

The Possible Bitcoin Hard Fork and its Repercussions on Trading
wpDiscuz