With the UEFA Euro 2016 championship finally kicking off in France, ‎‎24option, one of the largest binary option brokers worldwide, has created a new promotional video that ‎features four of the famous football stars that play for FC Juventus, one of the ‎oldest professional football clubs in Italy. The club signed a partnership labelling the ‎binary broker as the club’s exclusive partner on a global level, acquiring offline and online ‎marketing rights. ‎

The advertisement illustrates not only how far binary options has evolved as an industry, but also how far 24option has come over ‎the past few years. ‎

The new commercial, called “Let your talent burst”, is promoting a new ‎educational campaign with the company promising its clients a “complete talent ‎training pack worth $10,000 after their first deposit”.

Finance Magnates reached out to a company representative to get more official information ‎about the new advertisement. Emma Morris, the Partnership Director ‎at 24option, commented to our reporters on the news: “We are very ‎proud to launch this campaign with the strength of the Juventus team. As partners ‎we share simple core values; passion, commitment and enthusiasm for our clients ‎and fans.” ‎

‎24option is no stranger to football sponsorships, as the brokerage firm was ‎the first from the world of binary options to collaborate with a football club. In 2014 ‎the company signed a two-year partnership with Juventus ‎which will run until the end of the 2015/ 2016 season, and which has now been extended until 2018. The unique deal ‎includes a number of activities that aim to enhance the broker’s branding and sales ‎outlay such as exposure at the club’s home ground with advertising through ‎LED boards, in addition to images of players, rights to the club’s Asia tour and ‎hospitality. ‎ 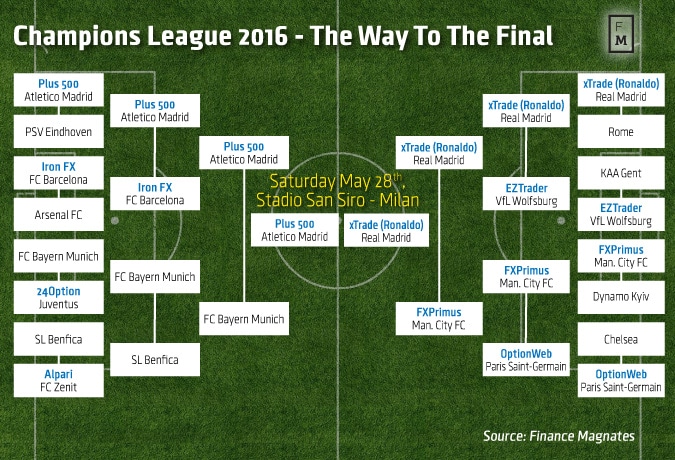 The latest developments show not only the areas of convergence between the ‎online trading industry and the world of sports, but also how far the binary ‎options industry has evolved, finally entering the ‎mainstream. Just a few ‎years ago, most average people had never heard of binary options.

Times have changed, indeed. It was really hard to imagine that a top tier football ‎club such as Juventus could consider signing a sponsorship partnership with a ‎binary options broker. ‎

Jumping on the Bandwagon

Many other binary and forex brokers have also jumped on the bandwagon and ‎decided to reach global audiences by taking advantage of the ‎massive popularity of the European Championship. If you have followed the internet ‎ads over the past couple of days you may have noticed that a number of brokers which ‎have sponsorship agreements with football clubs have intensified their advertising ‎efforts in conjunction with the opening of UEFA Euro 2016.‎

‎The famous sports betting/games providers already use sports ‎sponsorships to spread awareness of their brands among the football ‎masses. Also, the high costs involved may raise questions regarding the expected ‎returns from such very expensive deals, and if the principle aim is to capture a large number of newcomers rather than showing existing clients that their broker is so well established and ‎capitalized that it can spend money on such costly partnerships.