Markets reopened 2016 to much fanfare as weakness in China circled the globe with equity losses echoed across Europe and North America.  The new week has also seen a demonstrable pickup in economic data versus the last two weeks of holidays which saw fundamental announcements pared back to a minimum.

Now that markets are abuzz and investors are busy implementing 2016 investment theses, the outlook for the euro remains challenging despite strengthening fundamentals.  As monetary policy diverges further from other advanced economies and unemployment remains stubbornly high, the onus falls on policymakers to enact more pro-growth fiscal policies for 2016 to continue stabilizing the region and outlook for inflation in conjunction with the highly accommodative measures from the Central Bank.

Since the implementation of asset purchases last spring and the subsequent monetary policy loosening undertaken by the European Central Bank, fundamentals from across the region have begun to show signs of improvement as evidenced by the latest manufacturing readings.  According to PMI figures reported yesterday, manufacturing continued to expand in December with Germany and Italy showing the biggest gains while France and Spain managed to stay above the critical 50 threshold.  The aggregate PMI figure for the Euro Area also climbed modestly to 53.2, beating expectations of 53.1.  Manufacturing improvements in particular are likely attributed to the softness in the euro over the last year, raising export competitiveness, however, inflation remains a sticky issue amongst policymakers.

The latest reading of German consumer prices showed that despite the best efforts of the ECB to anchor expectations and stoke investment, inflation continues to languish.  The annualized headline figure from Germany printed at 0.30%, falling from 0.40% prior and missing expectations of 0.60% by a wide margin.  Month over month, the headline figure tumbled back into negative territory as price pressures from energy weighed on the figure.  Inflation figures from the aggregate Euro Area are set to be released later in the session with current preliminary expectations showing 0.30% consume price inflation year over year.  Core CPI is also estimated to experience a minor uptick, however, the figures remain distant from ECB President Mario Draghi’s target and focus on price stability.

Moreover, aside from weak inflation is weaker unemployment, a proven sore spot amongst policymakers and a phenomenon that is leading towards more extremist political views and the rise of far right parties across Europe.  Unless sovereign governments are able to sidestep austerity with the implementation of fiscal stimulus to tackle joblessness, high levels of youth unemployment in particular are likely to translate to a more frayed political outlook which can weigh further on policy.  From a monetary policy perspective, Draghi may be forced to expand asset purchases by an additional €15-20 billion in order to keep the euro weak, and moving down towards parity with the US dollar to insulate the economy and maintain growth over the medium-term.

Speculative positioning in the euro hardly changed according to the latest numbers from the CFTC, with net shorts currently at -160,600 contracts in a sign that speculators remain bearish on the outlook for the common currency.  Even though the euro rallied on the latest monetary policy decision from the ECB, continued tightening from the Federal Reserve may snuff out any prolonged rally as evidenced by recent price action.  After briefly breaking key support at 1.0800, the EURUSD managed to show a slight rebound after a particularly volatile session.  This also marked a key level for the head and shoulders bearish setup that had emerged in earlier weeks, confirming the bearish bias and outlook for the pair. 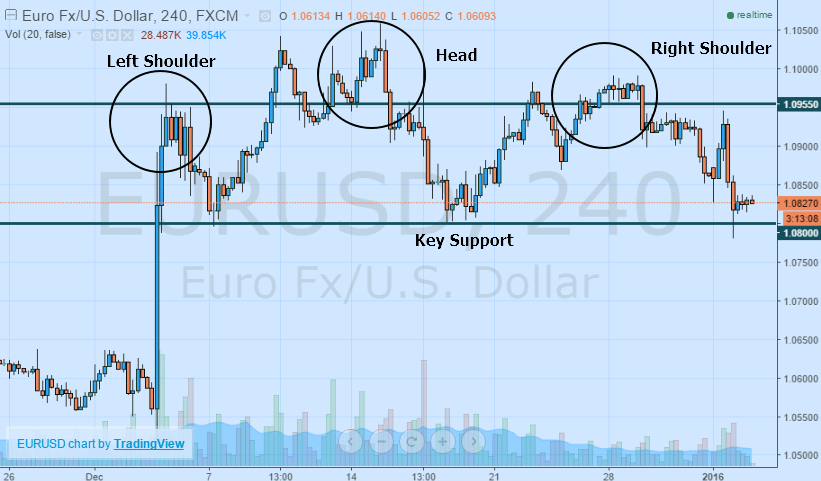 Adding to the bearish case is the moving average crossover from the end of November which saw the 50-day moving average cross the 200-day moving average to the downside in what is commonly called the ‘death cross’.  This notoriously bearish pattern coincides with the head and shoulder’s pattern to give a clear signal for the EURUSD pair.  Ideally, put positions should be initiated on any candlestick close below key support at 1.0800 or a bounce off of the 50-day moving average which is currently acting as resistance.  The first target for any EURUSD put positions is pre-ECB meeting lows near 1.0500 with parity at 1.0000 the next goal for put positions.  However, should EURUSD manage to find legs and climb back above resistance at 1.0955, it could signal another bullish drive back towards 1.1100. 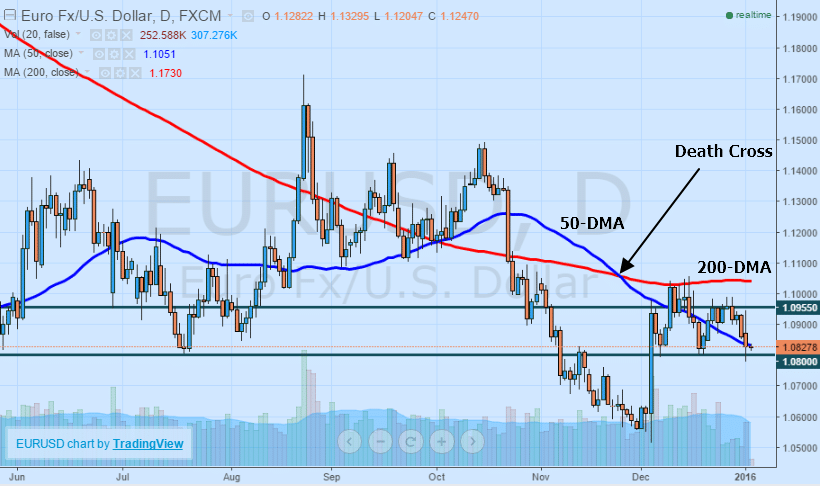 The fundamental outlook for the Euro Area has improved modestly in light of the extremely accommodative monetary policy measures undertaken by the Central Bank, however, there remain headwinds to the escape from crisis-driven policies.  Weak inflation and high unemployment continue to drag on the common currency and might require further monetary easing to restore these metrics to more normal levels.  By comparison, the efforts undertaken by the Federal Reserve to normalize policy will continue to weigh on the EURUSD pair over the medium-term.  With these factors in mind combined with the bearish technical indications, Put positions are ideally initiated near resistance from moving averages and on any confirmed close below key support at 1.0800 with the target of parity over the coming months.

Any analysis at the macro level involve … macro analysis.