The DAX 30 is slightly lower in relation to this week’s high of 10.068, but it keeps its bullish bias since mid-February. The overall trend is bullish above the ECB rate meeting low of 9397.

We note that Financials have been weighing on the DAX 30 and we will be keeping an eye on the shares of European banks such as Deutsche bank, HSBC, and BNP Paribas. These shares have traded lower in the aftermath of last week’s ECB rate cuts. Should the bank shares resume their bearish trend, then this may hint at a weaker DAX 30.

As highlighted yesterday, the pullback in the DAX may, in the current environment of easy monetary policy by central banks, be perceived as an opportunity to add to long positions.

Should the DAX slide below last Thursday’s low of 9397 however, then the trend may turn bearish and reach the February 24 low of 9122, followed by the February 11 low of 8705.

Volatility in the DAX may pick up this afternoon, as the University of Michigan Confidence report is published and on speeches by Fed’s Dudley and Rosengren. The day concludes with the Baker Hughes U.S. Rig Count. See our economic calendar. 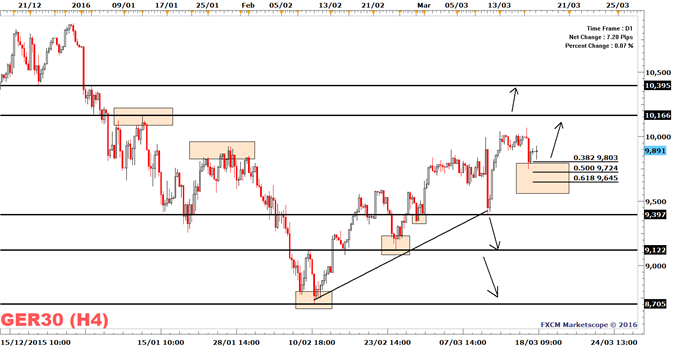