The DAX 30 (FXCM: GER30) has regained some of yesterday’s losses as traders are trying to come to terms with what yesterday’s ECB action actually means for both the economy and the value of stock markets.

From a technical point of view, the trend remains moderately bullish as the February 29 low of 9336 has held as a support and the DAX may gain further over the next few days. A stronger sign of traders seeing the ECB’s actions for looser monetary policy as stock market positive would be a successful break to the January 27 high of 9931. On a break to the 9931 high, the DAX could reach the January 13 high of 10,171, which could be followed by the January 5 high of 10,395.

When does the trend turn Bearish?

On a break to the February 29 low of 9336, the trend would probably turn bearish and price may reach its February 24 low of 9122, with a breach to this level potentially exposing the February monthly low of 8705. 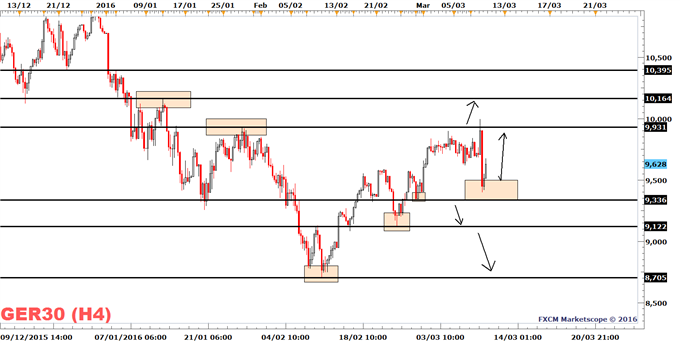