The impending US presidential election race is dominating headlines and airtime around the world, but is it really such a big event for markets?

Both currency and equity markets appear to think not. We are currently only seeing low levels of actual volatility, with low levels of future volatility also expected in many markets. Does this suggest an air of complacency or are we facing the calm before the storm?

The Calm Before the Storm?

By first looking at historical market reaction, we can make several observations. With regards to the previous six elections and the range on the dollar index in the two weeks before and after the event, we can see that this range was higher prior to the elections.

The margin observed is not that great, only 16 percent lower on average in the post-election period. So, if we are to see greater volatility in the days afterwards, that would be very much the exception to the rule that undermines the ‘calm before the storm’ argument. 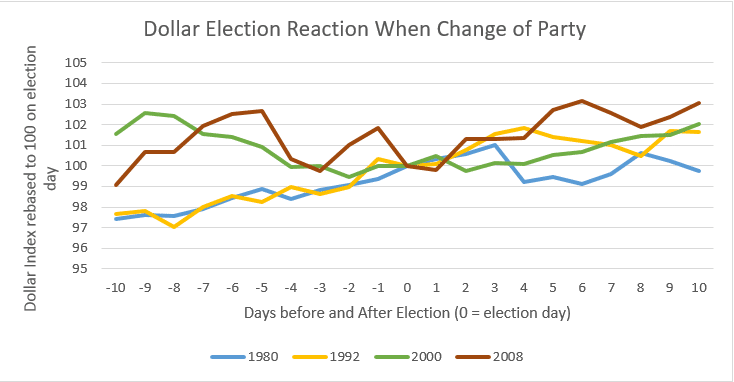 The second point to note is that, if anything, there is a tendency for the dollar to rise when there is a change of party. You can see that in the chart. There is no such tendency evident when we look at equities. Perhaps there is an element of hope, especially after a period of ‘lame duck’ Presidency which may occur in a President’s second and final term.

The Most International Currency

But when focusing on currency reaction, we need to consider both the dollar’s position as an international reserve currency, as well as the fact that it does not react the way other currencies would in the same situation. Recall a few years ago the debt ceiling crisis of 2013.

The US government was at the point of being shut down over the demands that the Congress was making in return for raising the debt ceiling, which acts as one of the many checks on the President’s power.

It was only at the 11th hour that the dollar started to react. In other words, the prospect of a complete government shut-down barely had an impact on the currency.

This, of course, is combined with a political system that, through the constitution, imposes many restraints on Presidential power, as well as with an election cycle that means we are never more than two years away from either a Presidential or mid-term Congressional election.

To sum this up, the dollar is the most international currency worldwide, with its value determined only at the margins by the whims and desires of US politicians.

So what does this all mean for the current election battle and how should we expect markets to react? In currencies, the Mexican peso has been the barometer of Trump’s fortunes; something to do with the wall and more protectionist talk (85% of Mexico’s exports go to the US).

The Mexican peso has been the barometer of Trump’s fortunes.

A Trump victory would see a substantial depreciation, not double digits in percentage terms, but perhaps not that far off. In broader terms, and on the assumption of a continued Republican majority in the Senate, the dollar could initially be weaker.

Being the global reserve currency, that dynamic will override any domestic considerations, which in theory could be dollar positive should tax cut talk gather pace, as a higher than otherwise anticipated path for interest rates is factored in.

On the majors, the euro will likely be the main beneficiary, with the yen not far behind. The euro has acted as something of a safe haven at times and this could well be one of those times, even if it’s just because investors don’t like the alternatives (such as sterling or the yen).

Conversely, a Clinton win would see the Mexican peso rally, as the perceived Trump threat is removed. Thereafter, the dollar would appreciate as the market moves to fully price a December tightening by the US Federal Reserve, with this coming more against the euro and yen. Beyond that, it will be largely business as usual and especially so if the Senate remains Republican.

For equities, it’s a harder call. Trump has said that he will boost growth (partly via tax cuts), but how that will be achieved is far from clear. Faster growth, higher profits, lower taxes should be good for equities, even if interest rates are slightly higher than otherwise. But there are lots of uncertainties in there.

Whoever the next US President is, the long-term challenges facing them are the biggest of modern times.

Short-term, stocks could be lower on the uncertainty factor, but with scope to recover thereafter when more clarity comes about. For Clinton, the outlook would be modestly negative as a December tightening is priced in and the Fed becomes more confident in projecting rate increases for 2017.

But for me, the checks and balances in the US political system that serve to limit the power of any one entity and also that of the President also serve to ensure that tough decisions are rarely made. This relates to the huge ballooning of entitlement spending, the ever rising levels of debt and of an economy that is struggling to face up to a diminishing role in the world, both economically and politically.

Combine this with an already mature economic cycle and a Fed struggling and failing to get rates away from near zero, and we begin to realise that whoever the next US President is, the long-term challenges facing them are the biggest of modern times.

How they react to such challenges will likely have a decisive impact on the markets not only during the coming months, but most importantly, over the coming years and perhaps even decades.

Trade Responsibly: remember CFDs are leveraged products and can result in the loss of all invested capital.

Disclaimer: This material is considered a marketing communication and does not contain, and should not be construed as containing, investment advice or an investment recommendation or, an offer of or solicitation for any transactions in financial instruments. Past performance is not a guarantee of or prediction of future performance. FxPro does not take into account your personal investment objectives or financial situation. FxPro makes no representation and assumes no liability as to the accuracy or completeness of the information provided, nor any loss arising from any investment based on a recommendation, forecast or other information supplied by an employee of FxPro, a third party or otherwise. This material has not been prepared in accordance with legal requirements promoting the independence of investment research and it is not subject to any prohibition on dealing ahead of the dissemination of investment research. All expressions of opinion are subject to change without notice. Any opinions made may be personal to the author and may not reflect the opinions of FxPro. This communication must not be reproduced or further distributed without prior permission.