In recent months, the east coast of Australia has been struggling with dangerous bush fires which have brought a lot of damage to the New South Wales community, among other areas. Helping to support the people affected by the fires is Australian broker ACY Securities.

On Friday, the foreign exchange (forex) broker was formally acknowledged by The Salvation Army Hurstville Corps, a large charitable organisation in Australia, on Friday evening for the charity’s 120th-anniversary charity gala. 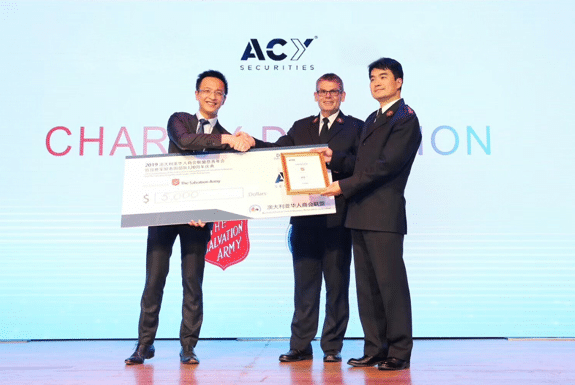 The Hon. Victor Dominello, Minister for Customer Service, who was representing the Premier of New South Wales, presented the award to Justin Pooni, the Head of Branding & Communications for the Aussie broker, in an onstage ceremony.

Pooni was presented with the trophy and framed certificate in front of a ballroom of around 400 guests. Upon receiving the award, he said that the company aims to help and support the community wherever it can.

“ACY Securities strives to maintain a strong grassroots presence in the community and we’re delighted to be able to help and support the community, especially in moments of needs,” Pooni said.

Beginning in early August of this year, the Australian east coast experienced an unprecedented number of major bushfires across multiple states which continue to remain a threat to this day. Typically, the bushfire season starts around December.

ACY Securities is a multi-asset broker regulated by the Australian Securities and Investments Commission (ASIC). The company was recently mentioned positively by Senator Andrew Bragg of the Australian parliament and the Hon. Damien Tudehope, Minister for Finance, NSW Parliament.