With last week’s iFX Expo Cyprus now in the books, it’s time to review trends and feedback from the forex and binary options B2B conference. As in the past, this post is a personal review of the happenings at the show.

New products? Not really – Unlike years past, there weren’t a slate of new products being introduced at the event. In replace, many firms used the expo to promote existing products that received recent feature updates. The consensus opinion was that the industry had reached a saturation point of new products. As a result, brokers aren’t necessarily looking for the next big thing like social trading or binary options, but how to squeeze more revenues from their existing business through improving efficiency in their payment systems or lead generation.  In addition, prior to the conference, several startup providers had mentioned to me that some brokers were limiting their new product purchases due to market uncertainty following the SNB event in January which may also have affected new product rollouts last week.

New players? Yup – While new products were down, new entrants did emerge with adaptions of existing market products. Among them, one area that saw two new firms exhibit was trading analysis tools. Challenging incumbents Trading Central and Autochartist were Claws and Horns and AI FX and Equity. Claws and Horns showcased their trading analysis and signal platform that integrates with MT4 platforms or is available as a licensed standalone offering. Riding the wave of machine learning technology, AI FX and Equity presented their product, which adapts its technical analysis signals based on their performance and changing market conditions.

Elsewhere, the ever expanding binary options provider space continued to grow with recent entrants, Air Soft and NAX Trader. In addition to binary options, both firms also offered forex trading platforms as part of their solution. The combination of the two becoming more common among platform developers over the last year and a half.

The question that remains to be answered though is whether there is enough room in the market to support so many binary options providers. Answering this question, a founder of one of the older providers stated that he believed the market was growing quickly enough to sustain new entrants. However, we did notice that two firms that had been active at the expo in the past, namely MarketsPulse and Binary Station weren’t exhibiting this year.

Expanding features – One trend that continues to take place are existing firms widening their services. In 2014, this meant brokers launching prime of prime (PoP) institutional services. During that year, FXCM, FXOpen, Saxo Bank and TradeNext all announced the launch of PoP offerings. That trend continued this year with retail broker, ICM Capital launching an institutional ECN solution. Another trend that continues is the advent of forex brokers splitting and marketing their technology as separate units, with recently launched Market Technologies, the technology arm of AFX Capital exhibiting as a standalone offering.

‘Keep it simple stupid’ (KISS) – The adage of KISS fits very well when it comes to industry conventions. While we all may want to explain every facet of our products, keeping the pitch short and showing the product are two keys of presentations. In this regard, the seasoned presenters easily stood out from the novice exhibitors who appeared to struggle at times with explaining what value they provide compared to competitors.

Examples of the former who described their value proposition effortlessly were long time exhibitors and included Sucden Financial, SpotOption and MetaQuotes (keep in mind this is a personal opinion and partial list, with others also doing a great job). Selling not so sexy liquidity, Sucden specifically did a good job of relating that they are a well-capitalized PoP of which customers have less to worry about after events like the January 15th SNB crisis. It’s a short pitch, but one that quickly can relate to prospective clients to keep them engaged for more information.

On a personal note, at our own Finance Magnates booth I experienced a similar situation. When providing the longer pitch of what the website and events are, the message wasn’t relayed well. However, when I simply said that “we are a financial website and our advertisers are companies likes the ones you see exhibiting at the show because they reach a business audience” or “we are presenting an event like this one in Tokyo where exhibitors will have the chance to market to CEOs of Japanese brokers”, the pitch was better received (yes that was a shameless pitch for our services).

Forex = Gambling? Yes, No, Maybe – Maybe it has to do with being around contacts that have been in the business for a while, or a temporary sentiment shift after the Swiss franc crisis, but I received more feedback than usual of industry professionals questioning their involvement in the forex and binary options market. This sentiment was by far the minority, but represented large enough of a base that was meaningful. Specifically, I encountered quite a few people that were developing or searching for products that were more aligned with their customers. Primarily, the focus seemed to be more on non-forex assets such as stocks.

Affiliate emergence – Even with industry skeptics emerging, there was plenty of energy from existing and new affiliate operators. As cost per acquisitions (CPA) of clients continues to increase, affiliates with experience in sending traffic to brokers or other online services were bullish on the opportunities of working in the forex and binary industry. This was seen as what seemed like a record high of affiliate operators attended the iFX Expo.

Swag – I’ve wondered if the quality of swag at industry events is a lagging or leading indicator of broker performance. Let’s hope it was the latter, as the free items being doled out were much better than last year (although fewer shots of whisky at the booths were making the rounds). Popular items were portable smartphone batteries and cables as well as prize linked to mini challenges like the soccer balls (yeah I know I am in the minority for not calling it a football) from FX Primus and golf set from Hello Markets.

Which leads to the question of who else had a flight delayed due to lack of overhead bulk space for the boxes below? 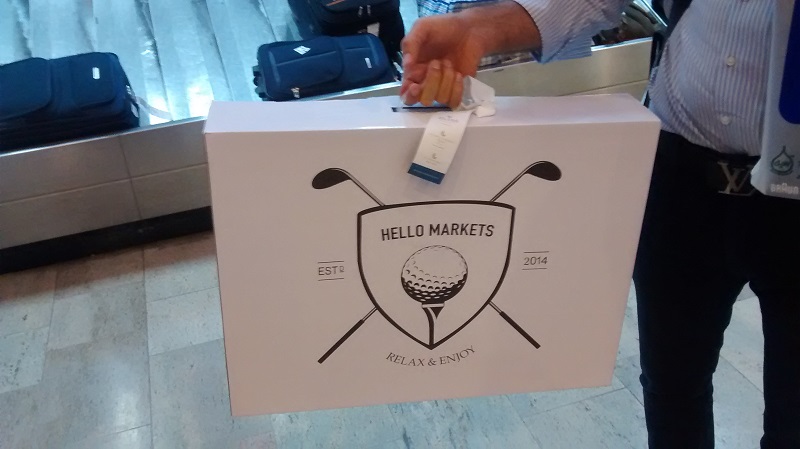