China’s currency, the renminbi, is under review as to whether or not it will join the four other global reserve currencies in the International Monetary Fund’s (IMF) Special Drawing Rights (SDR) basket. A positive decision would further accelerate the use of the “redback” as an international currency and validate China’s ambitions to become a major player in the global financial system. 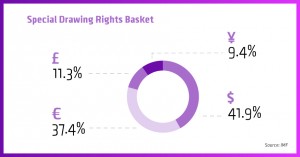 As part of a five-yearly process, the IMF is scheduled to review the composition of the SDR basket in 2015 to ensure that it reflects the relative importance of currencies in the world’s trading and financial systems. Given the increased international usage of renminbi and the growing economic clout of China, the renminbi’s eligibility for inclusion in the SDR basket is now on the table to be endorsed by the IMF’s executive board.

The SDR is a supplementary foreign exchange reserve asset. Its value is based on a basket of key international currencies – the Japanese yen, pound sterling, U.S. dollar and euro – and SDRs can be exchanged for freely usable currency to help maintain a balance between countries with big external liabilities and those flush with cash.

Opening up the currency to international market forces is seen as an essential ingredient in the progressive development and liberalization of domestic financial markets. The continued international usage of the currency further contributes to the currency’s “store of value”, taking it one step closer to becoming a truly global reserve currency.

But to become a reserve currency, it must meet IMF criteria. The renminbi meets the first criterion for inclusion in the SDR basket; that is that the country must be a major exporter. Indeed, over the past five years, its exports averaged 11% of the global total. According to The Economist, that places it behind the European Union and America, but well ahead of Japan and Britain (the four countries whose currencies currently make up the SDR).

The second criterion stipulates that the currency must be freely usable; that is, the currency is widely used to make payments for international transactions and is widely traded in the principal exchange markets.

This is open to interpretation. It is not hard to argue that the renminbi is widely used. Since 2010, corporations anywhere in the world can settle in renminbi. Late last year, the Society for Worldwide Interbank Financial Telecommunication (SWIFT) revealed that the Chinese yuan became the 5th most popular payment currency in the world. Indeed, more than 900 financial institutions in over 70 countries are already doing business in the Chinese renminbi.

In principal, the IMF could therefore decide that the renminbi meets this criterion.

However, while the development of the offshore market for renminbi has been a key part of the reform strategy, capital controls restrict the flow of funds between the onshore and offshore markets, thereby preventing full convertibility.

But as Siddharth Tiwari, Director of the IMF’s Strategy, Policy, and Review Department, states: “The concept of a freely usable currency concerns the actual international use and trading of currencies, and it is distinct from whether a currency is either freely floating or fully convertible. In other words, a currency can be widely used and widely traded even if it is subject to some capital account restrictions.”

“The Chinese renminbi is the only currency not currently in the SDR basket that meets the export criterion. Therefore, a key focus of the current review will be whether the RMB also meets the freely usable criterion in order to be included in the SDR basket,” he added.

A key focus of the current review will be whether the RMB also meets the freely usable criterion.

The debate is therefore not about the widespread usage of the currency or the exporting strength of China, rather about the ongoing liberalization and development of financial market reforms.

As Eswar Prasad, former IMF country head for China, remarks: “The decision about the renminbi’s inclusion in the basket hinges on financial market development, further opening of the capital account, and greater exchange rate flexibility.”

In particular, an IMF report calls on China to increase foreign access to its onshore stock and bond markets, especially government bonds.

“We believe that the RMB’s inclusion in the SDR (and indeed RMB internationalization itself) is being used mainly as a goalpost, to catalyze domestic financial sector reforms, especially interest rate liberalization and China’s capital account opening,” Tao Wang, UBS China economist, wrote recently.

Moreover, the U.S., which has the largest voting right, is also reluctant to endorse the renminbi’s inclusion in the SDR basket. According to FT, Jacob Lew, US Treasury secretary, in late March urged more progress in deregulation of Chinese cross-border investment flows and domestic interest rates before an IMF endorsement of the renminbi.

However, European powers such as Germany, France and the UK have expressed support for adding the renminbi this year.

The IMF today announced that it has proposed extending the current SDR basket decision by nine months until September 30, 2016, which is much more of a compromise than delaying the decision until the next mandatory review in 2020, and speaks to the political sensitivities surrounding the issue.

Commenting on an extended decision timeline, Siddharth Tiwari, said: “This is in response to feedback from SDR users on the desirability of avoiding changes in the basket at the end of the calendar year and facilitating continued smooth functioning of SDR-related operations. An extension of nine months would also allow users to adjust to a potential changed basket composition should the Executive Board decide to include the RMB.”

For China, SDR basket inclusion is symbolic to global recognition of its rise in status.

Of course, inclusion of the renminbi would validate the Chinese government’s ambitions to raise the status of the Asian currency in line with broader geo-political aspirations.

“For China, SDR basket inclusion is symbolic to global recognition of its rise in status,” Paul Mackel, Head of Asia forex research at HSBC, wrote in a recent report. “The very stringent requirements for currency inclusion in the SDR serve as a quality assurance to global users that the currency in question is indeed very liquid and stable as a store of value.”

Christine Lagarde, IMF Managing Director, is reported to have said that the renminbi’s inclusion is a “matter of when, not if.”

The delayed deadline is perhaps about giving China more time to continue to reform its financial markets before joining the SDR club.

2) So bitcoin couldn’t become a SDR basket because of lack of exports?