KCG Holdings, Inc. (NYSE: KCG), a securities trading exchange, has just reported its latest trading statistics for the month ending November 2016, which rebounded strongly after one of the most volatile trading months of the year, according to a KCG statement.

During November 2016, KCG reported an average daily US equities market making figure of $32.8 billion traded, which surged 26.6% on a MoM basis, vs. just $25.9 billion back in October 2016. Global markets were all the beneficiaries of heightened volatility last month, given the surprise electoral victory of Donald Trump.

Equities ADV on the Uptick

KCG’s total average daily shares traded during November 2016 yielded 3.9 million shares, down from 3.19 million shares back in October 2016, or 22.3% MoM. The sizable ascension was also pronounced over a yearly timetable, constituting a jump of 10.5% YoY from 3.53 million shares per day back in November 2015. 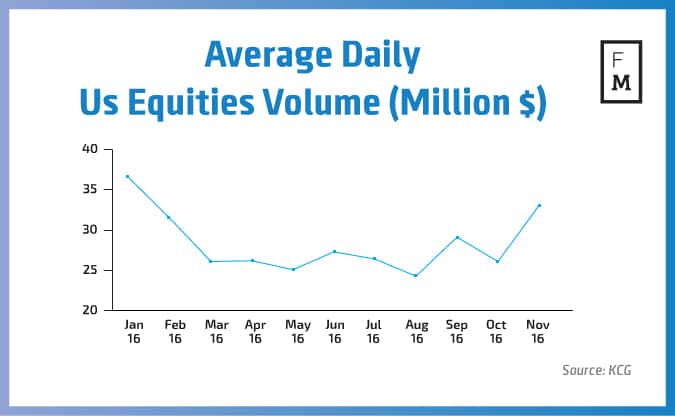