FXSpotStream has released its latest set of trading volumes to the public with figures for the month of July remaining solid. The company has reported that total trading volumes amounted to $412.6 billion which is lower only by 9.6 per cent when compared to last month’s figures which were greatly impacted by the Brexit vote.

The foreign exchange ECN (Electronic Communications Network) trading venue has marked Average Daily Volumes (ADV) at $19.6 billion, a figure that is higher by 39.6 per cent when compared to a year ago and lower than last month by merely 5.3 per cent. 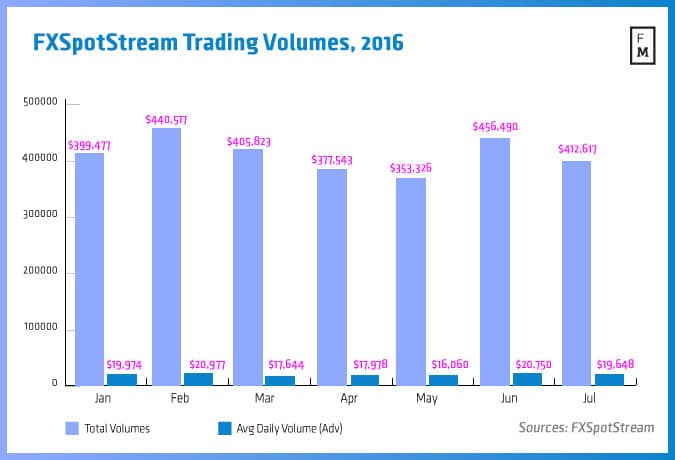 Considering the impact of the 4th of July holidays on these figures, which usually lead to a couple of days with slower trading activity, the performance of FXSpotStream in July has been quite solid. The metrics have continued to be impacted by pockets of volatility which has been the theme since the beginning of the year.

Compared to the rest of major ECNs that have already reported their numbers for last month, FXSpotStream is performing rather briskly, with year-on-year growth only mimicked by Fastmatch, which has committed substantial resources to expanding its sales staff in the past year.

The results are another reminder that the Brexit vote, just around the time that calendar summer began, has impacted trading volumes across the industry in a positive way. Companies are seeing unusually high trading activity for a month like July, which is typically slower.