The founder and head of Chinese exchange, the Fanya Metal Exchange (FYME), faced an angry mob on Monday when he tried to check-out of his luxury Shanghai hotel. 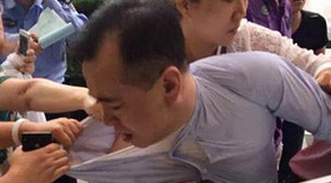 Hundreds of dissatisfied and irate investors swarmed Mr Shan Jiuliang at dawn, jostling him into a taxi and turning him into a local police station, according to the FT.

Mr Shan has since been released without charge.

The angry investors were seeking justice (and their money back) over an investment called Ri Jin Bao, a financial product guaranteed by FYME that promises retail investors annualized returns as high as 13.7%, and the right to withdraw funds at any time.

In a situation comparable to that of Cyprus-based IronFX, investors have been left wondering about the credibility of the scheme after they have been denied access to their funds since July, with FYME citing “liquidity” issues. A reported 40 billion yuan ($6.4 billion) owed to 220,000 investors across the Middle Kingdom are caught up in the scheme.

Mr Shan’s seizure follows a number of other demonstrations against FYME, as affected investors demand their money back. Up to 800 outraged individuals protested outside the company’s Kunming headquarters, and another 200 in Shanghai, in July.

A few days after the protests, FYME said it would buy back 5 billion yuan (US$787 million) worth of investments with money from partners, which include China’s biggest banks and metals companies. It’s been silent on the rest of the money so far.

Founded by Shan, FYME is a minor metals spot trading exchange with 14 listed commodities. It provides buying and selling via its exchange as well as financing services for minor metals enterprises.  According to its website, by the end of June 2015, the accumulated turnover amounted to more than RMB 325.7 billion, with more than 230,000 members nationwide.

Investors in China, many of whom are uneducated and have very little access to data, research and analyses, have been facing a difficult time of late.  Latecomers to the stock market boom have seen their investments vanish as the market has plummeted, with Chinese stock prices plunging 8.5% in the most recent episode of volatility on Monday.

Share this article
Tags: china / metals
Got a news tip? Let Us Know