In what is being called ‘Black Monday’ in China, the Shanghai Composite Index (CSI) fell 8.5% to 3,209.91. The slump was the largest single day decline in China since 2007 and wiped out previous gains for 2015. While the CSI is still about 50% above its November 2014 levels when it first began to rally, the index has fallen nearly 40% from its highs in June.

Reacting to the losses in China, stocks in the US are following Friday’s losses with an even greater decline. Opening lower, futures for the S&P 500 and Dow Jones 30 both signaled to a lower opening. When trading did open, the Dow quickly fell over 1000 points into the red to hit a low of 15,370, a 6% decline (prices have since rebounded about 400 points from their low). Previous to the open, circuit breakers for US equity index futures were hit, which temporarily halted their trading before the US market opened at 9:30 AM EST. 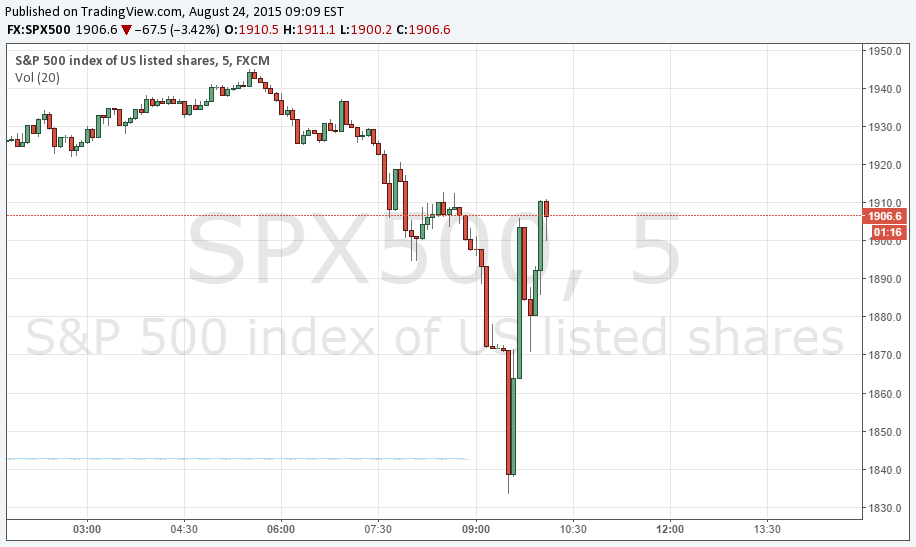 Following last week’s poor performance, today’s drop has caused the S&P 500 to currently be trading 10% below last week’s high. Overall, the index is signaling a correction to its previous bull market performance.

The spike in volatility and quick dive lower has broken a period of more or less sideways trading in US stocks that begun in February. During that period, prices fluctuated between a 3.5% band. As such, due to the low volatility, some traders believed that the market was vulnerable to a correction. Prior to last Friday’s drop, Andrew Lane, CEO of Acuity, stated that its news sentiment service showed a “steep fall in sentiment towards the S&P500 on the 19th August in both hourly and daily data, preceding the sharp decline in prices.” Lane added, “Last night sentiment took another tumble, and that news volume has also spiked to it’s 360 day high, highlighting fears that we could be finally turning the corner into a bear market.”

Share this article
Tags: Stock Market
Got a news tip? Let Us Know