KCG Holdings, Inc. (NYSE: KCG) has released its monthly trading volumes for the January 2016, which secured a sizable advance to kick off the new year, according to a KCG statement.

During January 2016, KCG’s figures finally snapped out of a tight consolidation to storm higher, with an average daily US equities market making coming in at $36.2 billion traded, or 27.5% MoM from $28.4 billion in December 2015. The upbeat volume was even higher over a yearly timeframe, as volumes notched a climb of 20.3% YoY from $30.1 billion in January 2015.

By extension, the total average daily shares traded at KCG were disclosed at 4.9 billion shares in January 2016, which was higher from December 2015’s figure of 4.6 billion shares, justifying a monthly boost of 6.5% MoM, snapping a three-month consecutive decline of these figures.

At the time of writing, KCG share prices have reached a relative floor in recent weeks during February, currently settling at the $10.25 ahead of the US open Friday. Despite the drop, KCG share prices still sit above its 52-week low of $9.75 set this past August despite a very low P/E of just 4.27. 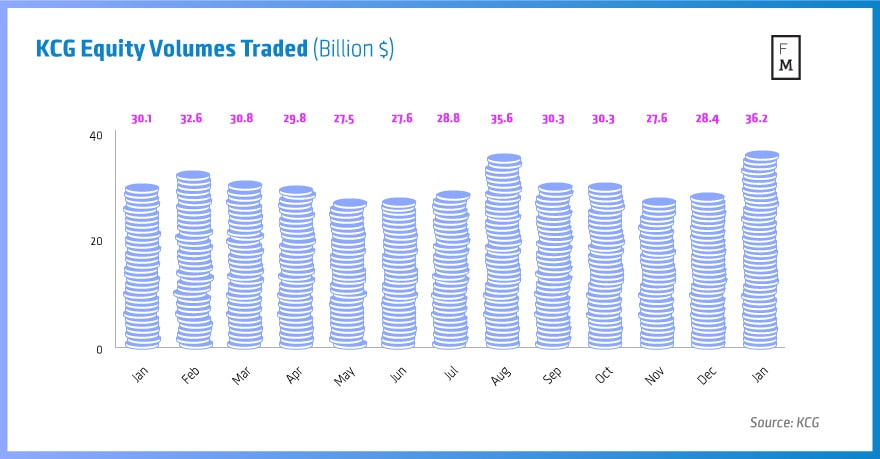 Share this article
Tags: kcg
Got a news tip? Let Us Know