Like the CME the IntercontinentalExchange posted a solid month in FX trading, even as overall trading was lower year over year.  During the month, average daily volume (ADV) was 32,712 contracts in the FX group, 25% higher YoY, but slightly below December’s figures.  While underperforming the CME, the ICE figures were still strong considering that December volume had risen over 30% from November.

Average Daily Volume (ADV) for futures and options was 3,478,414. Total contract volume in January 2013 was 73 million contracts. All prior period contract volumes have been adjusted to include the converted futures contracts, which previously traded in ICE’s OTC markets.

IntercontinentalExhange Inc is a US-based exchange which is listed on the NYSE under the symbol ICE and operates global OTC markets and clearing houses in North America and Europe, with trading firms in 70 countries worldwide along with market data customers in 120 countries. The majority of instruments on the exchange are in the energy, agriculture, foreign exchange and equity index categories. As far as the energy sector is concerned, ICE has more than half of the world’s crude oil and refined petroleum product futures volume.

As of October 15, 2012, ICE transitioned all of the open interest in OTC cleared energy swaps contracts to futures contracts. All futures volumes in the tables above have been adjusted to treat, on a pro forma basis, the OTC cleared energy swaps contracts as futures contracts for all periods prior to October 2012. RPC is calculated by dividing transaction revenues by contract volume, and may vary based on pricing, customer and product mix. 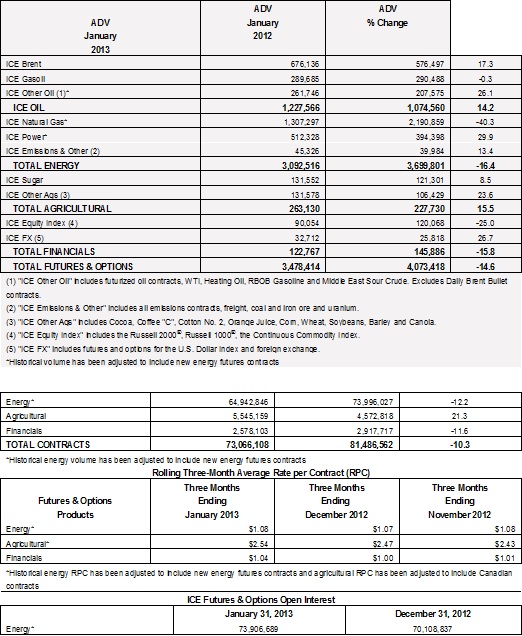