ICAP has reported its aggregated trading volumes across its electronic foreign exchange (FX) platform EBS for the month ending May 2016 – the results showed a continuation of the venue’s declining volumes, which have now fallen in four consecutive months, according to an ICAP statement. 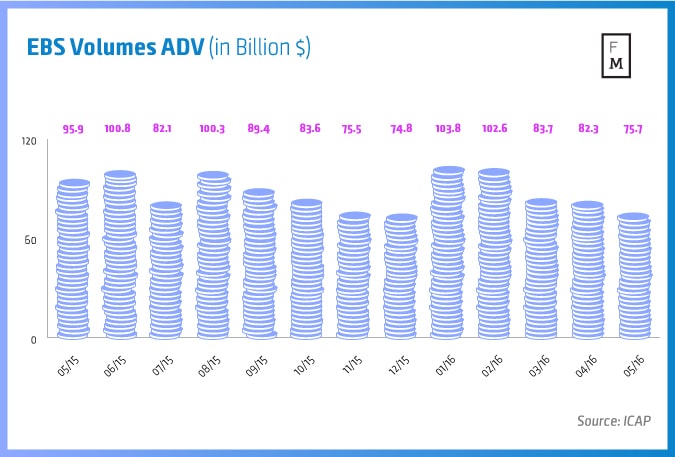 The lessened figure is even more lackluster when measured against its 2015 counterpart, having orchestrated a decline of -21.1% YoY $95.9 billion set back in May 2015. Institutional exchanges have been pointed lower in Q1 2016, which looks to be the trend heading into H2 2016 – the narrative has been the same between both institutional and retail FX and derivatives venues.

Furthermore, ICAP’s US Treasury activity during May 2016 did manage a slight rebound and growth for the month of 8.2% MoM, having yielded a figure of $156.4 billion from $144.5 billion in April 201. While this completely pares last month’s losses in this space, the recent state of the US Treasury market and movement has certainly helped kindle trading of many securities, including treasuries. Finally, May 2016’s treasury activity in May 2016 left a little to be desired relative to 2015, falling by -15.1% YoY from $184.2 billion in May 2015.