ICAP has just released its trading volumes across its electronic foreign exchange platform EBS, during April 2016, which largely showed the decline in volumes that have been afflicting the exchange since January of this year, according to an ICAP statement.

Despite maintaining a tight consolidation in trading volumes during April 2016, EBS’ FX volumes still declined to $82.3 daily, representing a fall of -1.7% MoM from $83.7 billion in March 2016 – EBS’s volumes have been unable to rebound in any month thus far in 2016, with each successive tranche of volumes resulting in lower figures. This trend has been seen across virtually all other institutional venues as well and is not specific to EBS.

By extension ICAP’s US Treasury activity during April 2016 was also lower, coming in at $144.5 billion for the month and registering a loss of -7.0% MoM from $155.3 billion in March 2016 as US Treasury’s have been in a state of flux in recent months. In addition, April’s treasury activity was exactly congruent with its 2015 figures, matching the $144.5 billion of April 2015. 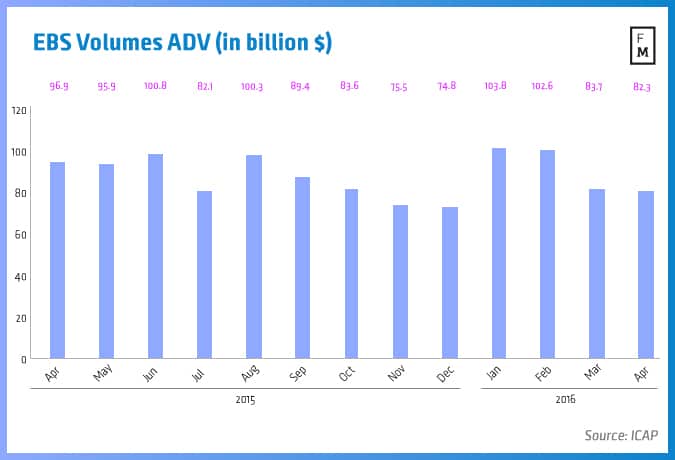