On Thursday, July 7, the market plunged 4.84% after the release of the U.S. Energy Information Administration’s weekly inventories report that was delayed one day because of the July 4 holiday.

According to the EIA, U.S. commercial crude stockpiles fell by 2.2 million barrels to a total of 524.4 million in the week through July 1. Traders were looking for a drawdown of 2.3 million barrels, far less than the 6.7 million-barrel draw reported by trade group the American Petroleum Institute for the same period on July 6.

Crude oil futures traders also reacted negatively to the EIA’s gasoline inventory drawdown that was just about a third of market expectations.

Helping to put a cap on crude oil recently has been the lack of demand for gasoline with many traders fearing a glut of the motor fuel, despite the busiest season for driving in the U.S. Thursday’s report confirmed this notion when the government report showed inventories fell less than expected, slipping 122,000 barrels versus forecasts of 353,000 barrels. 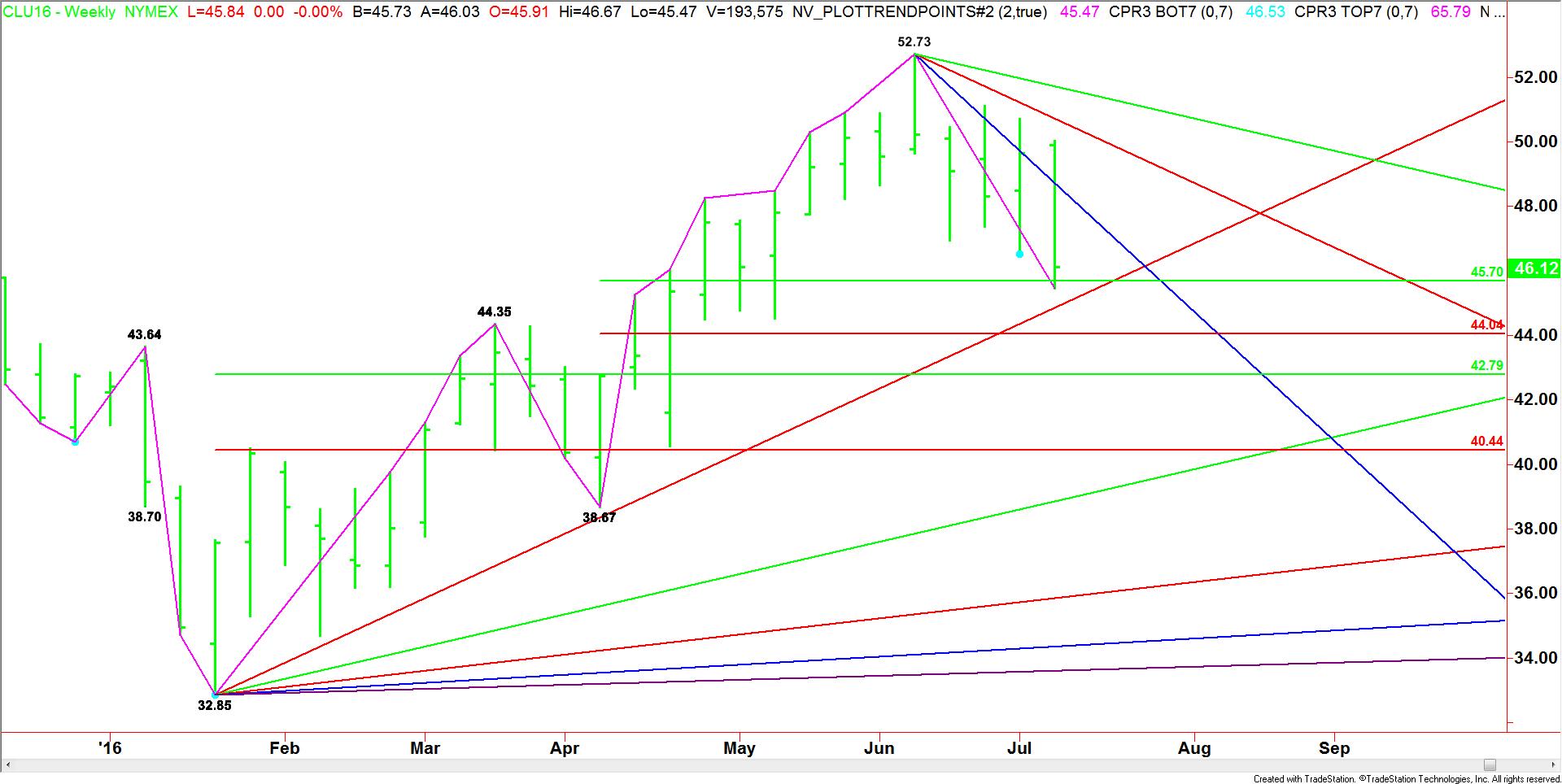 Crude oil futures were helped a little by the news that weekly U.S. production fell by 194,000 barrels per day, however many traders feel that monthly data that operates on a significant lag is more accurate.

Crude oil has been struggling for several weeks to hold onto its gains. While many investors have been focusing on the traditional supply/demand fundamentals, the wildfires in Canada and the terrorist attacks in Nigeria, a steep drop in gasoline prices have been gnawing at crude oil support.

Profit for turning crude oil into gasoline, known as the gasoline ‘crack’, fell to a February bottom below $13 a barrel as oversupply in the motor fuel forced U.S. refiners to cut output. There have also been reports that Vessels carrying gasoline-making components could not unload at New York Harbor due to a glut.

The ‘crack spread’ is nearing the critical area which would encourage refiners to dial back on production runs. This would further damage crude oil demand and likely lead to lower prices.

With supply declining slower than expected and demand expected to fall because of the aftermath of Brexit, crude oil prices are expected to continue to weaken over the near-term until they reach a value area. At that point, the markets may stabilize, but there is still no guarantee we’ll see $50.00 again this year given the situations in the U.K. and Europe. 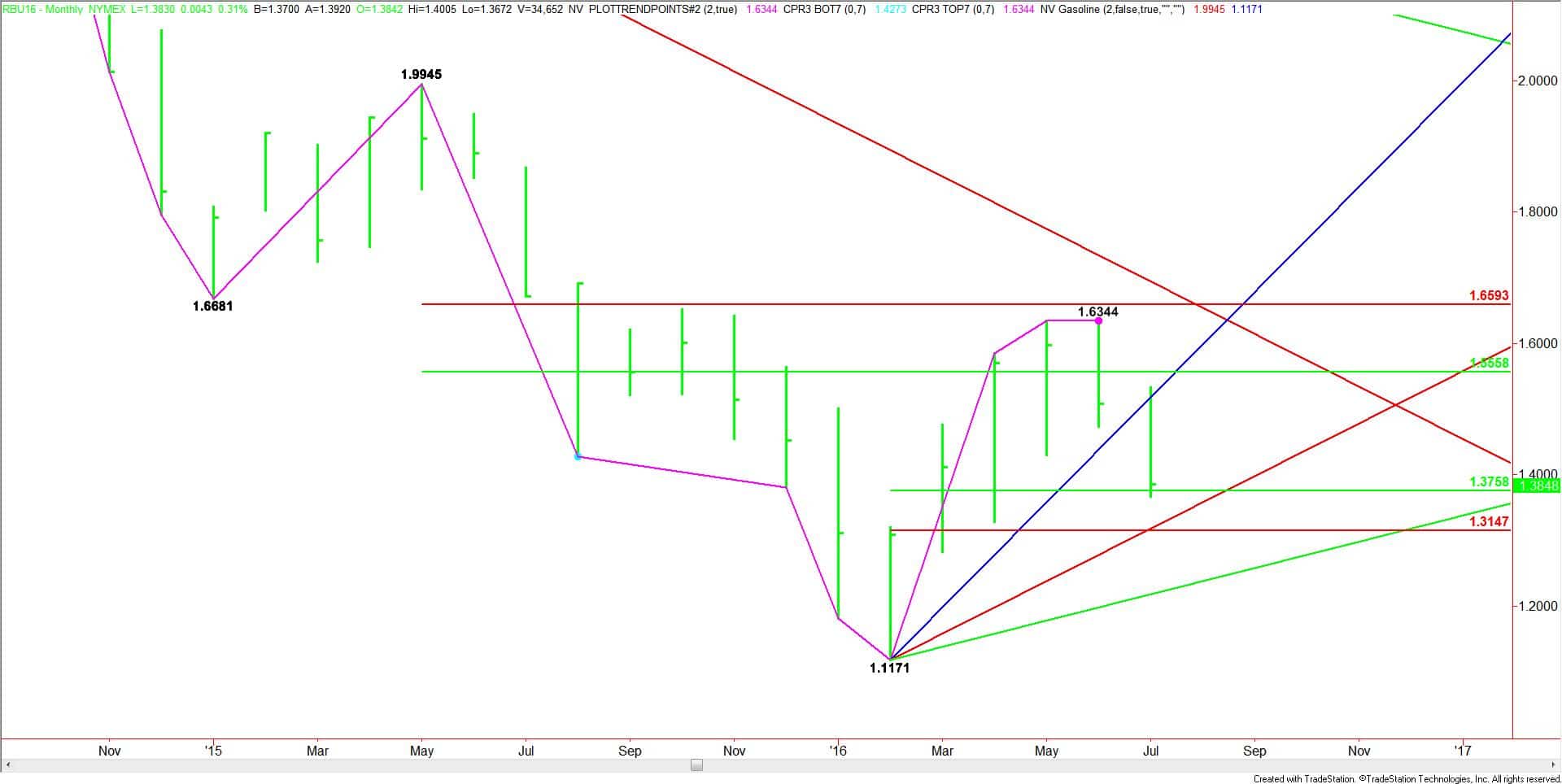 The weekly September gasoline chart clearly shows this market is pulling crude oil futures lower. Its main trend is down according to the weekly swing chart. The trend turned down this week when sellers took out the previous swing bottom at $1.4295.

We could see a technical bounce on the first test of $1.3758, but the downside momentum and the current fundamental picture suggests that any rally is not likely to last and that it will only create another shorting opportunity.

If sellers are able to sustain a move through 1.3758 then the next downside target comes in at $1.3147. If this price fails as support then we could see the start of an acceleration to the downside with a possible target of $1.2500 the week-ending August 19.

Crude oil prices have further downside potential over the next 6 weeks with the market primarily being driven by weak gasoline prices. Both markets are trading well below steep downtrending angles that are driving crude oil down by a rate of $1.00 per week from its June top and gasoline prices at a pace of $0.04 per week from its high the week-ending June 10.

Although both markets are in a position to test major retracement zones of their 2016 range, the markets could still trade through them and retest their contract lows later in the year if buyers don’t recognize these areas as value.

Overall, I have to conclude that crude oil and gasoline are in their potentially weakest position since January.

Plunge in Gasoline Prices Setting Up Crude Oil for Steep Decline
James A. Hyerczyk is a financial analyst for FX Empire, a leading financial portal. James has worked as a fundamental and technical financial market analyst since 1982. His technical work features the pattern, price and time analysis techniques of W.D. Gann.
wpDiscuz