The Netherlands is officially becoming the next EU member state to make good on its promise for stricter regulation of retail financial products. The Dutch AFM (Financial Markets Authority) is preparing to limit the advertisement of certain financial products that the country’s government deem too risky. Today the Dutch regulator published a communique which effectively starts a period of consultation with the industry and clients of the financial services.

The scope of the ban includes a number of financial instruments that are geared towards the retail investor. In contrast with the French regulator, the AMF, which has only targeted retail brokers, the Dutch government officials have included products from commercial banks into the list. 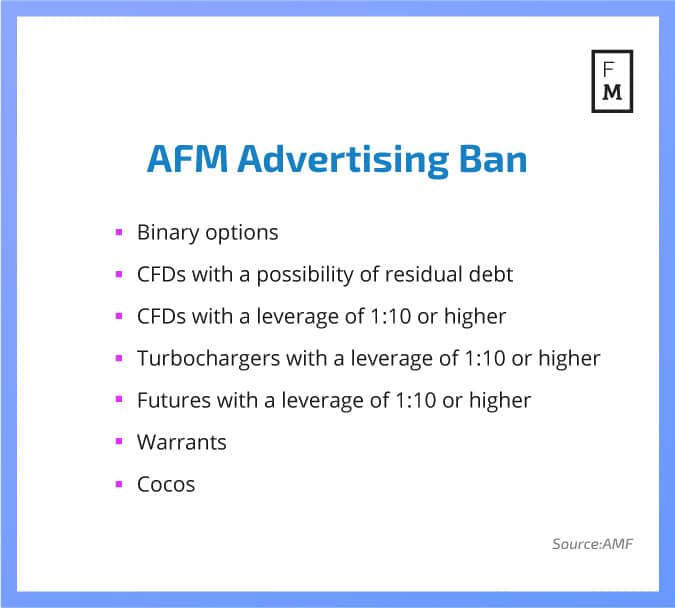 High-leverage products will be limited across the board with binary options, forex and CFDs with over 1:10 leverage being forbidden. The country’s regulator is also enforcing a ban on warrants, cocos (Contingent Convertible bonds), futures and some turbocharged products with leverage higher than 1:10, which have been on the offer by commercial banks.

Commenting to Finance Magnates, Nick Bortot, the CEO of BUX, which is one of the fastest growing financial trading apps in the industry, said: “We’re very happy to see that the Dutch and other European regulators are cleaning the industry. Since we’ve launched BUX two-and-a-half years ago we have always offered conservative leverage levels.”

“Even with all the new regulation coming up, in most cases we do not have to amend our product offering to comply with regulation. The interests of a company and its customers should simply be aligned. If not, there’s an unsustainable situation which inevitably leads to regulators taking action. What’s happening now should have happened a long time ago,” Bortot elaborated.

Negative Balance Protection a Must

The AFM is also forbidding advertisement for CFDs providers that do not offer negative balance protection to their clients. Firms will continue to be able to offer their products only if they secure the maximum downside for their clients.

According to the President of the AFM, Merel van Vroonhoven, the low interest rate environment has pushed companies to offer and savers to seek higher risk products.

“We are dealing with parties that offer these products from abroad,” Vroonhoven said.

“Our priority is to protect consumers against products that result in large losses or involve high costs. With the advertising ban, we have an important tool in the hands in the fight against toxic products,” the president of the Dutch regulator said in a statement.

The most questionable part of both the Dutch and the French authorities is the enforcement of the advertising ban.

While advertisements might be forbidden for regulated brokers, unregulated companies could well become more active on the Dutch market, filling the void left by regulated providers.

Jeroen Dijsselbloem, the Dutch Minister of Finance, hinted at the possibility in September last year.

The Dutch government has highlighted that the reason for the ban are warnings from European regulators that national supervisors should take action to limit risky products offered to consumers on a large scale.

The comment from BUX CEO Nick Bortrot is a Joke. Offer Trading with so horrible cost and indirect cost over intransparence Quotes. To be presented as a cleanman is cheeky.