In recent years, there has been significant interest in Belarus. The much smaller neighbor of Russia has been experiencing an astonishing expansion in the field of FX/CFD, surpassing even its larger neighbor, Ukraine. However, the political unrest that has continued since last year’s presidential election has thrown a shadow on the local industry and its future. What has really happened to the forex business in Belarus and should anyone be worried? Finance Magnates takes a closer look at the subject.

Belarus shares a similar story to Ukraine. This country, which has been ruled by one man since 1994, has often been seen as a post-soviet relic where doing business is very difficult. At that time, the whole post-Soviet area in the East of Russia was the only place to do business with. However, the crackdown on the Russian retail FX industry, especially in 2018, created a large window of opportunity for Belarus. Suddenly, it became an attractive alternative for Russian FX brokers from where they could approach the whole Russian-speaking world.

The official election results held on 9th August 2020 revealed that Aleksander Lukashenko won his sixth term as President, raking in about 80 per cent of the vote. His first election was won in 1994, and he has been the longest-ruling president in Europe. As a result, a large majority of the Belarusian population participated in protests against the President’s administration, with accusations of widespread rigging of the polls.

A popular but misleading picture of Belarus in the West assumes that this is a very underdeveloped eastern European country where there is almost no private ownership and everything is dictated by the ruling President. While the state control indeed is large, the country itself enjoys the same changes and developments we see in western economies, just maybe on a smaller scale.

To get a better idea of how it looks from the inside, Finance Magnates asked for the opinion of the Libertex Group, which has an office in Belarus. Anton Cherkasov, Head of Global Sales at Libertex Group, told us: “We have been present in the Belarusian market for over ten years and have never had any problems with the state. Moreover, of all the CIS countries, Belarus is probably the leader in terms of a constructive and intelligent approach to the regulation of our sphere. In recent years, we have felt tremendous support from authorized government bodies in our business development. We have direct transparent communications with them and can note a zero level of corruption in our relationships.” 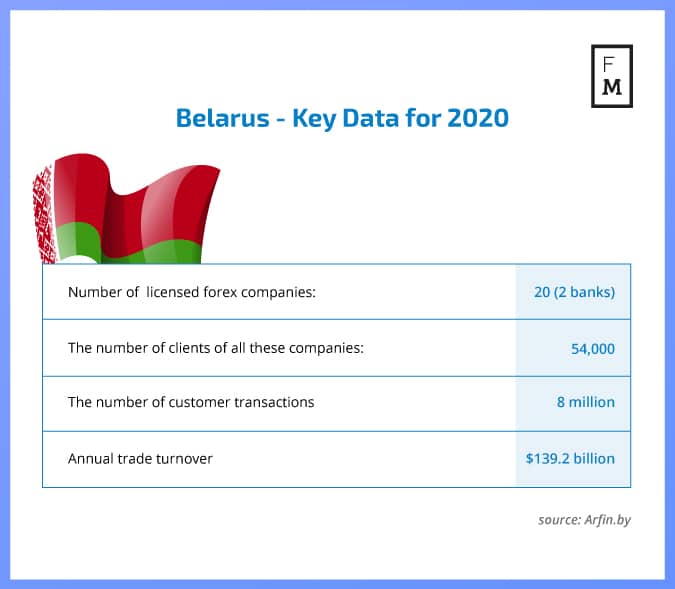 Where Will Belarus Be in The Near Future?

The number of forex operators in Belarus is really impressive. The annual data related to the forex industry clearly shows its growth and suggests a lot of trust that existing companies have in this market. For this reason, Finance Magnates asked local FX brokers for their opinion on the future of the industry in Belarus.

Cherkasov shared the following observation with us, “Of course, from the perspective of clients’ potential for investment, it isn’t easy to compare Belarus with European countries. Even in the 3-5 year perspective, it is difficult to imagine a situation when the potential of the Belarusian market will exceed 1% of the European market.”

To get the full article and the bigger picture on the future of forex industry in Belarus, get our latest Quarterly Intelligence Report.