The last few years have been challenging at the very least for the Danmarks Nationalbank as troublesome conditions in Europe have led investors in their droves to the haven status of the AAA-rated kingdom. The Danish Central Bank has undertaken numerous efforts to keep the speculators at bay and insulate the local economy from external developments with a combination of the outstanding EURDKK currency peg and negative interest rates.

However, as the latest fundamental data shows, the outlook for the Danes continues to crumble as evidenced by the lowest inflation readings in decades and increasingly sluggish GDP growth.  The Danish krone continues to give ground versus the US dollar as eurozone fortunes slide and the dollar benefits from Federal Reserve tailwinds, two factors unlikely to disappear in the coming quarters.

Although most market participants are carefully watching the tightening developments unfolding from the US Federal Reserve, the Danmarks Nationalbank opted to raise interest rates by 10 basis points in the latest decision from -0.75% to -0.65%.  The move to raise rates in the most recent decision reflects a degree of optimism in the outlook, with unemployment at 4.50% sitting at less than half the level of the comparable aggregate eurozone reading and inflation currently printing at 0.50%.  However, now in an effort to keep a lid on inflation, a period of rising rates may be in order as the central bank switches from an emphasis on weakening the krone to strengthening the krone. The problem with this policy is the longstanding currency peg.

The initiative to move rates off of record lows might have come early considering the recent commentary from ECB President Mario DraghIi who remarked that during the upcoming March meeting the ECB will consider expanding stimulus measures.  Additional accommodation is likely to consist of added asset purchases to the tune of €15-20 billion per month considering that the eurozone’s inflation has yet to experience a rebound towards the central bank’s targeted 2.00%.

This could see the krone face additional losses against the US dollar from current levels, especially if the euro falls. The high degree of inverse correlation between EURUSD and USDDKK ensures that should the euro decline, the krone will also follow suit.  Efforts to maintain the peg will undoubtedly put policy at odds with the economy, a risky situation for a central banker. 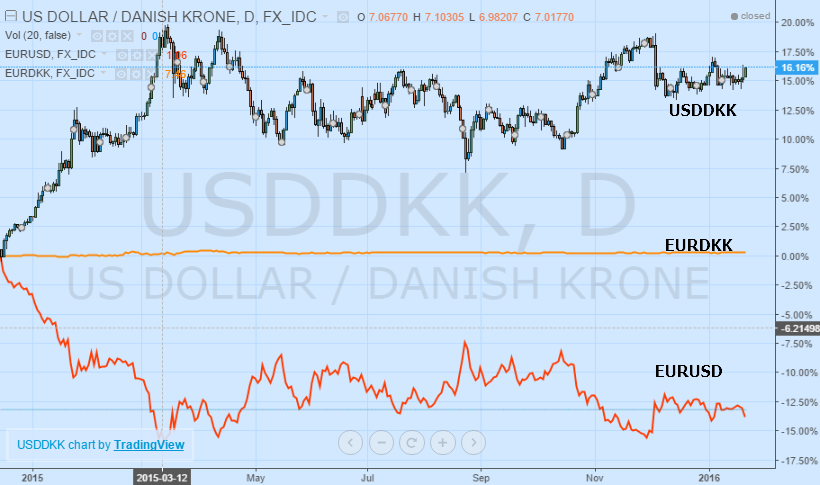 Even with positive fundamental developments in Denmark, policymakers are faced with several looming problems.  Defending the currency peg is not always cheap in spite of its relative effectiveness in preventing a speculative run on the currency.  Should there be another prolonged flight to safety move that forces the krone higher, it could pressure the central bank to cut rates once more in an effort to prevent a rapid appreciation.

Additionally, should the economy slip into a recession during the fourth quarter, it will likely force policymakers to accommodate policy further.  While this move might be effective in keeping the economy competitive, the tradeoff of a weaker krone is the exodus of investment capital which will be necessary to keep growth in positive territory. Ultimately, the central bank is highly reactive to policy from the ECB, meaning no changes are imminent until the ECB drops hints about its own policy outlook.

A cursory examination of the latest price action in USDDKK shows that the prevailing EURDKK peg is putting upside pressure on the pair and pushing it towards an upside breakout. Already, there is the emergence of an ascending triangle pattern which is indicative of a predominantly bullish bias in the pair.

The triangle pattern is formed by the consolidation of prices between a prevailing horizontal resistance level currently sitting at 7.0800 and a longer-term uptrend that has been intact for the last few years.  A candlestick close above resistance would suggest a triangle-based breakout to the upside to be accompanied by renewed momentum higher and confirmed by higher than average trading volumes in the USDDKK pair. Should the pair break out, it could see USDDKK rise to new multi-year highs, levels of which were last seen in 2002-2003. 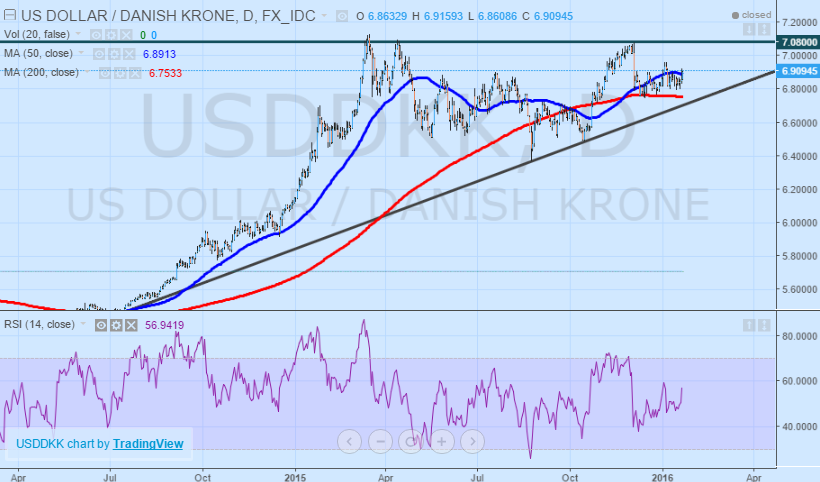 While the bullish bias remains intact over the longer-term, in the near-term there is room for a correction as evidenced by a confluence of technical indicators. Typically, when the shorter moving average crosses the longer moving average to the upside it is referred to as the “golden cross” technical pattern.

However, in this case, with the 200-day moving average starting to trend lower and the 50-day moving average following suit, there is rising evidence that a correction may be in the pipeline, especially with the relative strength index trending not far from overbought territory.

Although USDDKK is currently trending above both moving averages, meaning each is acting as support, should USDDKK retreat further, the 50-day moving average could quickly turn into resistance, capping any upside and indicating a deeper pullback before a resumption of the prevailing trend.

Even though Danish policymakers are working to strengthen the krone modestly following a prolonged period of weakness, this activity might prove fruitless if the ECB opts to ease policy further over the medium-term.

The outstanding peg which has left Denmark relatively unscathed during the previous crises might come under pressure, forcing additional accommodation from the Danmarks Nationalbank, a move that could see USDDKK rise to new multi-year highs.

Although near-term the krone might benefit from the rate hike, the possibility of additional Federal Reserve hikes and US dollar momentum combined with another leg lower in the euro could put the krone between a rock and a hard place. While USDDKK might be due for a deeper pullback, ultimately the bullish case for USDDKK remains considering the technical and fundamental outlooks.