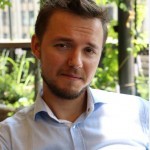 This guest blog post is written by Vladimir Bezruchenko

ABOUT THE AUTHOR: Vladimir Bezruchenko is an independent trader based in Kiev, Ukraine. He has been actively trading from home since 2013. He specializes in US natural gas futures (NYMEX Henry Hub) and high-yielding commodity currencies.

The oil market has been very weak over the past seven months. The price of a WTI contract went down more than 50% from its 2014 peak of $107 per barrel. Part of the reason for this dramatic sell-off is a resurgent US dollar, which is dragging down oil and commodities in general. However, oil got cheaper in virtually all major currencies (see graph below), meaning that other, more fundamental factors are also at play.

Most analysts agree that the main reason for the collapse in oil prices is a fundamental misbalance between supply and demand. While global consumption has remained broadly stable, global output went up. In fact, there has been a fundamental shift in the marketplace, as the growth in US shale oil production took off in 2011, leading to the erosion of OPEC’s global market share. Indeed, the United States has seen the most significant increase in oil production over the past four years thanks in large part to the technological breakthrough of hydraulic-fracturing and horizontal drilling. 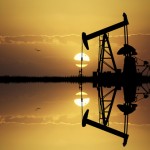 US oil output rose from 5.2 million barrel per day (bpd) in January 2011 to 9.3 million bpd in February 2015. That whopping 67% increase could not have gone unnoticed for the global balance, especially given that US is the biggest consumer and second biggest importer of crude oil in the world. But now that oil lost half of its value, the big question is – can US oil companies sustain their production at current levels?

Analysts have disagreed as to the level of break-even pricing for US shale. What is indisputable, however, is that oil companies are already cutting on future capital investments and curtailing drilling activity. Still, the latest figures from EIA indicate that field production of crude oil reached a record of 9,324,000 barrels per day, even as the number of oil rigs declined 43% from the recent peak (see graph below). What is the reason behind this seeming divergence?

One possible explanation is that oil production does not fall together with rig count. There is a time lag.

If we look at the typical oil-well production curves (graph below), we will see that the output is huge during the first 30-60 days of operation. Production then slows and after about 150 days of operation, the output from the fracked wells falls dramatically (to about 50% of initial output).

If these calculations are correct, than oil production has already reached its peak and from now on should only decline. Of course, a 40% plunge in rigs should not translate into a 40% decline in production in 140 days. What this graph shows is that we may be approaching a period when oil production growth starts running out of steam. We should probably see first q-o-q decline this spring and potentially witness a significant drop in output this summer.