Publicly listed Polish FX and CFDs brokerage XTB has been hit with a penalty to settle charges it prevented customers from receiving the benefit of price movements while allowing them to suffer from negative effects.

Poland’s financial regulatory body, the Polish Financial Supervision Authority (KNF), on Tuesday punished X-Trade Brokers with a PLN 9.9 million ($2.7 million) fine for “irregularities in the execution of client orders,” a statement from the regulator said.

In a time period stretching from January 2014 to the end of May 2015, XTB applied a practice known as ‘asymmetric price slippage’ which allows to pass on execution losses in full to clients. On the other side, the broker books profits generated from favorable price movements. In other words, XTB, as the counterparty to the transaction, executes client orders when the slippage was in its own favor, while customers were not receiving price improvement in the event that their orders were executed at a price better than anticipated.

A translated copy of KNF’s statement further explains: “the company applied an asymmetrical setting of the “deviation” parameter in the execution of client orders in the instant model (where it was guaranteed that the order will be executed at the price included in the order).”

It continues: “This resulted in the fact that the broker carried out client orders (in the case of a change in the price of a given financial instrument) in a way that was favorable to each other (as the other party to the transaction), and rejected the customer order parameter in the event of a price change in a customer-friendly manner.”

News surrounding the regulator’s decision has sent shock waves through XTB’s share prices, which is down five percent as of writing. 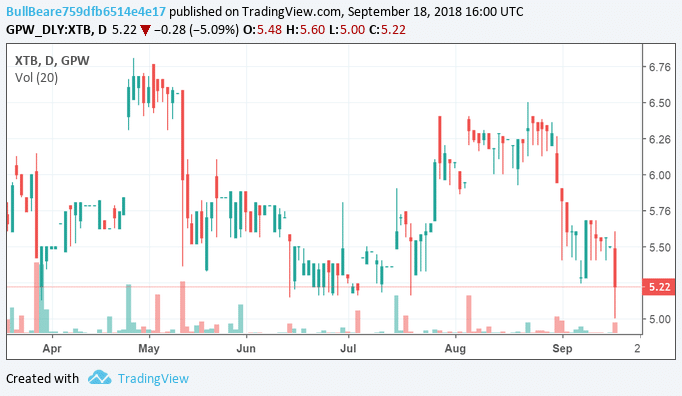 Rules that require brokers to always secure the best possible deal for clients have come up high on the financial regulators’ agenda recently.

Last year, the Polish watchdog and the prosecutor’s office, following a lengthy investigation, have accused XTB of fraudulently engaging in a series of client infringements to the detriment of its client base. The Polish Financial Supervision Authority estimates this to be in the range of PLN 8 million ($2.2 million) to upwards of PLN 23.5 million ($6.5 million).

XTB stressed shortly after the launch of the regulatory investigations in 2017 that it applies an execution model that passes on the full benefit of price improvements to its clients. The brokerage described the infringements alleged by the KNF as “unfounded.”

At the time, the legal setback caused an abrupt collapse of share prices which dropped by more than 35 percent, with forced stock exchange authorities to temporarily suspend trading.

Share this article
Tags: KNF / xtb
Got a news tip? Let Us Know