Issuing their H1 2015 results, Plus500 has reported net profit of $40.6 million on revenues of $127 million. The top line figures were similar to those expected when the forex and CFD broker announced its trading update in July. Overall, despite revenues growing 20% from the same period in 2014, net profit was lower by 25%.

The decline was due to a poor Q2, that included the revelation of compliance issues which caused them to suspend trading of a portion of its UK regulated accounts until they satisfied updated identification and document submission. The compliance problems triggered a dramatic slide in Plus500’s high-flying stock, ultimately leading the broker to accept a 400p bid to be acquired by Playtech.

Commenting on the declining profits, Plus500’s CEP Gal Haber did note that the firm had achieved profitability in each month of the quarter, as he stated, “Despite the disappointing regulatory setback in the second quarter, the Group was profitable in every month in the first half and our business model continued to be cash generative.” Haber added, “Whilst the Group has been the subject of a high level of regulatory scrutiny, we have made significant progress in enhancing our compliance and onboarding processes in line with the recommendations of our regulatory advisors.” 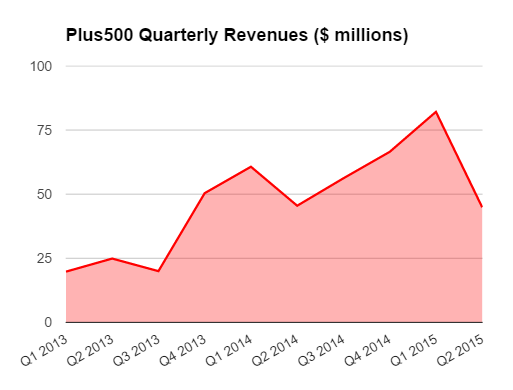 Looking ahead to the rest of 2015, Plus500 stated that Q3 has “started strongly” and that they expect overall revenues for the year to be ahead of 2014. Despite the revenue improvement, the firm believes that net profits will be below 2014’s figure of $102.5 million. In addition, the firm continues to believe its acquisition by Playtech will be completed by September.

I am quite impressed by the growth strategy of this company. It has obtained this status while running no call center operations, probability of which is virtually zero in this sector.