Plus500 has just issued a trading update on the second quarter of 2015, revealing that the company has experienced a substantial decline in its revenue stream when compared to the previous quarter and last year.

AUAC increased to $1,278 which is 43 percent higher than last quarter

Adding to the worries are the client accounts numbers with new customers dropping by 41 percent to 19,337 when compared to the first quarter. Throughout the same period active customers dropped a more modest 20 percent to 54,616. 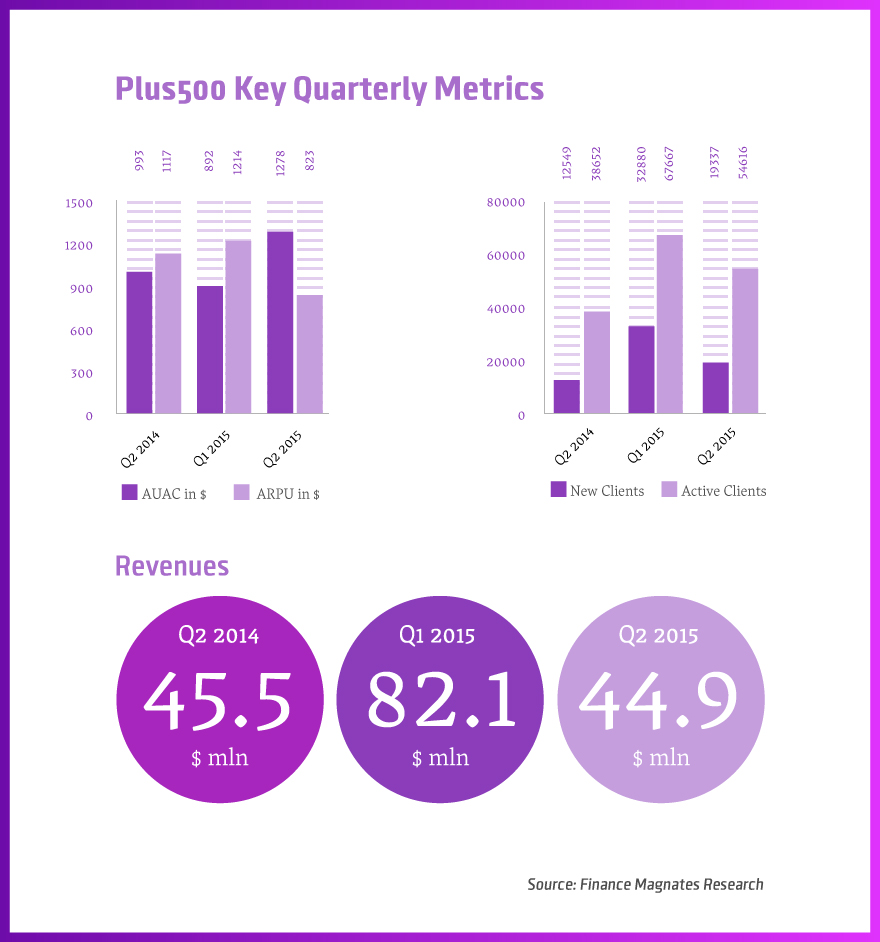 The record-breaking numbers from the first quarter are nowhere to be seen, which is in part explainable by the extraordinary conditions in which Plus500 got challenged in the past couple of months.

The CEO of Plus500, Gal Haber commented on the results, “The investment which we continue to make in the Plus500 brand and infrastructure has proved its value during the recent period of disruption during which we traded profitably in each month. Our superior proprietary technology and continued investment in the business position us well for continued profitable trading.”

While in previous quarters Plus500 has stated that it aims to acquire customers who spend more funds and hence justify increasing AUAC, the second quarter results are putting the company’s ability to the test to deliver on this promise in question. Not only did user acquisition costs skyrocket, but the revenue per user figures dropped materially when compared to last quarter and to a year ago.

The valuation which Playtech placed on Plus500 in the aftermath of the on-boarding process which the broker used in the U.K. suddenly doesn’t look that unattractive. When looking at these results it’s worth pointing out that foreign exchange and general markets volatility have increased materially when compared to the second quarter of 2014, and a number of brokers have been reporting much better figures than a year ago.

The firm elaborated in the second report submitted to the U.K. Financial Conduct Authority by its compliance expert, “The overall conclusion of the sample test was that there was no indication that the UK company had breached the requirement 2(i) of the second VREQ (requirement 2 dated 15 May 2015) that was agreed with the FCA.”

“The report made some recommendations on areas for further improvements identified in the review, each of which have been taken into consideration in the revision of the UK company’s financial crime policies and procedures,” the paragraph concludes.

The broker expects to re-initiate account opening for UK clients in August.

Share this article
Tags: earnings / plus500
Got a news tip? Let Us Know