US Retail Business Bucks The Trend

MONEX Group categorizes each of its business units according to importance and current status, citing TradeStation, the company’s North American operations, as the largest retail investor market. This is an unusual conclusion, as volumes continue to decline in the US retail FX sector and companies find the cost of keeping their organizations in line with very strict regulations increasingly affecting the viability of their business.

To substantiate this finding, MONEX confirmed today that its TradeStation platform hosted 1.2 times the active traders as that of rival firm E*TRADE.

MONEX’s Japanese operations continue to be the current revenue driver for the firm, with an operating income comparable to that of its contemporaries as follows: 80% of that of SBI Securities, 1.1 times that of Matsui Securities and double the income of Kabu.com

As is likely expected, China and Hong Kong are important growth markets for MONEX Group. BOOM, MONEX’s subsidiary in that region has adopted a strategic plan to tap into the market in mainland China, and offers access to over 15 equity markets in the Asia-Pacific region.

Japan, being home to the largest retail FX market in the world by a considerable margin, is by its very nature very much a country with a domestically orientated FX market, where most Japanese customers operate with Japanese companies, and the FX firms do not have such a need to seek business overseas as their home market is so established, however MONEX Group does consider the international market of importance.

The company’s IBFX division has a global customer base and is responsible for continuing to expand this on an ongoing basis, whilst IBFX also expands the white label business to penetrate Asian and Middle Eastern markets.

Incurred a gain on the sale of shares of Lifenet Insurance Company of  JPY 2,288 million

EBITDA for the quarter nearly reached the break-even point (USGAAP)

As a publicly listed firm, MONEX declared that its shareholders will receive an increased dividend payout ratio from 30% to 50% which is applicable from FYE March 2014 and to be announced in June 2013, and a completed share buyback amounting to approximately 4% of outstanding shares, or 120,000 shares, and retired all shares which were repurchased in May 2013.

In this quarter, as depicted below, the Group intends to launch the tradable platform for the international market, and has experienced a continued growth in Japanese trading volume. 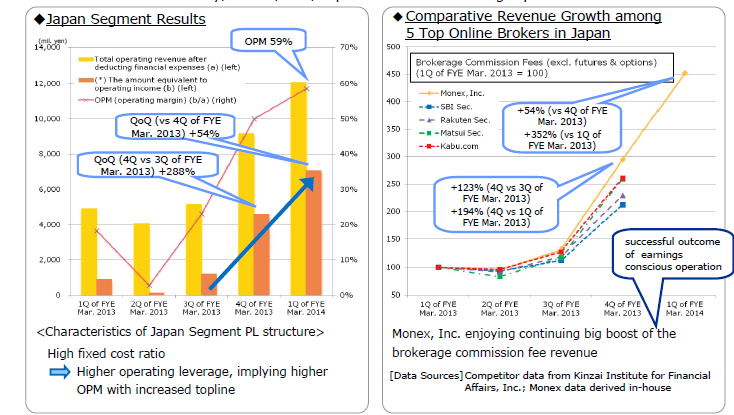 Compared to each quarterly period of the previous year, the entire business has, in line with the industry as a whole, improved in all markets including the US. The largest increase has been in the company’s home market of Japan. 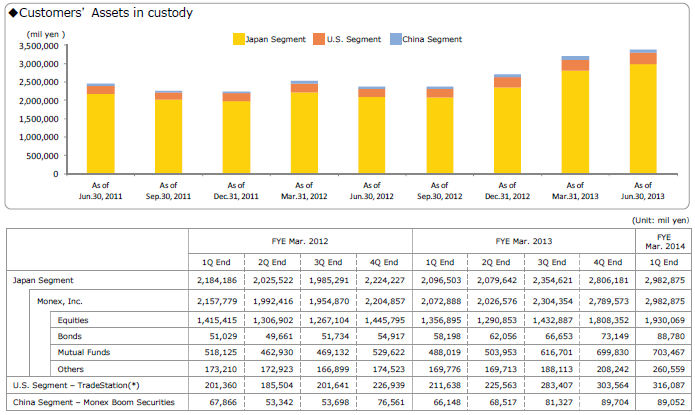 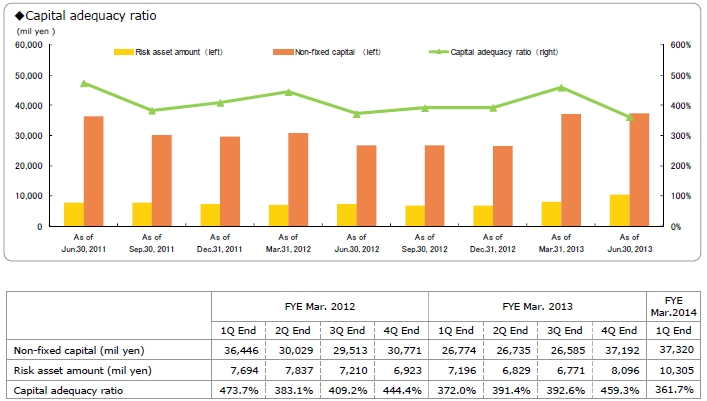 Overall, the company experienced a strong first quarter during this fiscal year, and has defined a steady growth strategy for the remainder of the period. In June this year, a clearer separation between operation & supervision of the company was agreed, and reinforcement of corporate governance, and ensuring optimum decision making environment at senior level were defined as priorities. 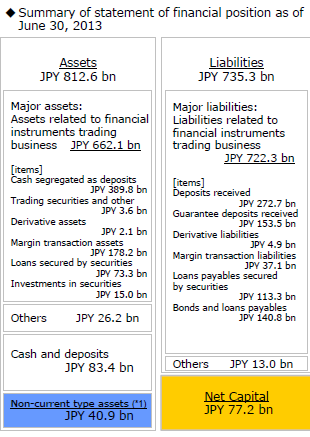 Two outside directors recently joined Monex: One of these appointments is a globally recognized business manager with a wide range of international business leadership expertise and the other is a qualified lawyer with law practice experiences in Japan & the United States, two crucial markets for MONEX Group.

Competition has increased domestically, but volumes continue to display healthy increases in Japan, attesting to a full recovery of what has been a strong FX industry in the nation for some years now.