The Monex Group has just released its monthly business metrics disclosure for December 2014, showing a month of slightly weaker results from the Japan-based global brokerage and its subsidiaries.

The group’s global FX trading volume in December was just $53.9 billion, a drop of about 2.7% despite having three extra business days over the previous month. This broke the straight upward trend from the previous four months of trading volumes for Monex. It now seems the volumes have plateaued after peaking at $55.4 billion in November 2014. 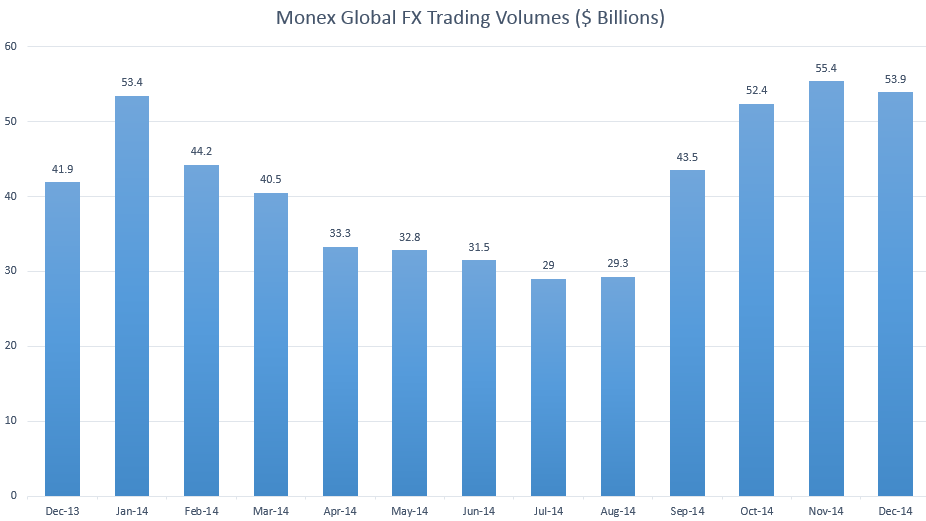 The total number of active OTC margin FX accounts at the end of the month of December 2014 was 63,052, just barely down by 0.05% from November. The average FX trade value per business day decreased by a considerable 9.4% Month-Over-Month to just ¥254,066 million, which might explain the overall drop in the volumes.

Monex also experienced a 2.8% MoM drop in its global Daily Average Revenue Trades (DARTs), meaning the number of trades and transactions per day which generate revenue, reaching 336,911 per day in December 2014. The DART’s figure is even worse for the group’s FX business dropping by about 4% MoM to 214,697.

The one bright spot for Monex in December 2014 are the results of its American subsidiary, TradeStation, which saw an increase of almost a thousand new active accounts by the end of the month reaching 64,522, 1.5% more than the previous month of the year.