Leading Japanese online brokerage, GMO Click Securities, today released its May 2016 trading volumes, showing a moderate decline in trading by 15.4% compared to the prior month, and dipping under the ¥100 trillion threshold to 95.96 trillion ($880 billion) – its lowest level since last December.

May marks the third month of declining volumes for GMO Click since its February peak of $1.43 trillion worth of transactions earlier this year that helped fuel its Q1 financials, while Q2 looks to be less robust on a volume comparison basis.

Down 10% from trailing average

Using GMO Click volume data compiled over the last fourteen months through May 2016, the average monthly volume has been $978 billion, and with May’s total of $880 billion 10% lower than the trailing average.

The USD/JPY pair pulled back in recent days from its May high under ¥111.00, while May volatility for the pair was subdued and trading contained within a narrower range when compared to April. June could be a different story.

Yen volatility down in May

As the UK’s vote approaches later this month, volatility may pick up considerably in major pairs including USD/JPY and related JPY cross pairs, potentially helping GMO Click’s volumes which are correlated to Japan’s currency, as explained in last month’s post about the company’s volumes.

Around the time of publication, GMO Click Securities shares on the Tokyo Stock Exchange’s JASDAQ market under ticker 9449 traded near ¥1298.00 and was little-changed compared to its opening price this Friday in Asia. 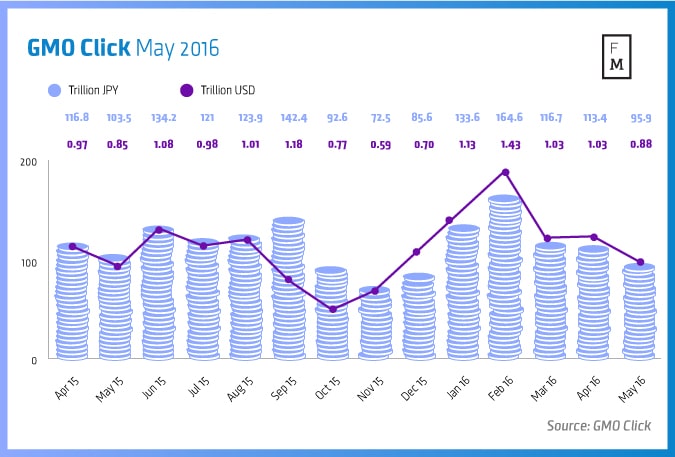