Leading online forex and CFD broker, FXCM Inc (NYSE:FXCM), announced that it was notified on September 3, 2015, by the New York Stock Exchange (NYSE) that it was not in compliance with the continued listing standards.

Under section 802.01C of the Listed Company Manual of the NYSE, listed companies are required to maintain an average closing price of the company’s common stock above $1.00 per share.

However, FXCM’s shares have been on a downward trend since the company took a heavy hit on Black Thursday back in January, when the Swiss National Bank decided to unpeg the franc, sending the currency soaring.

Since then, its share price has continued to fall. The notification letter cited that FXCM’s share price had fallen below $1.00 per share over a period of 30 consecutive trading days, which is the minimum average share price for continued listing on the NYSE. 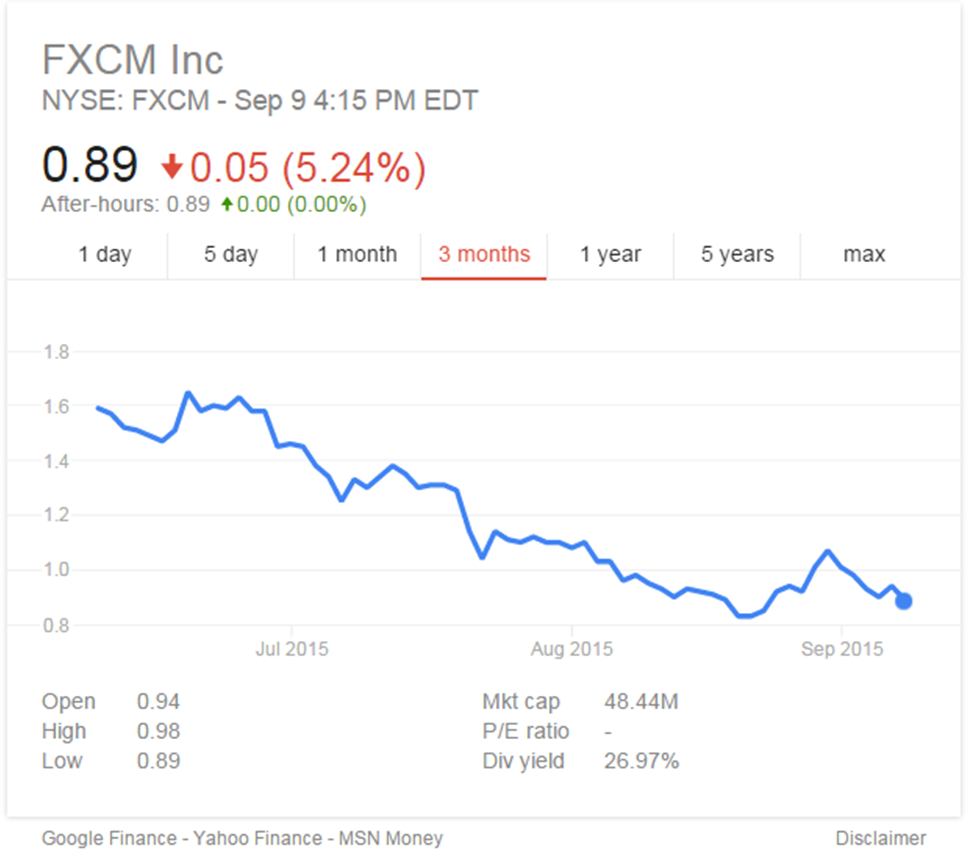 To remedy the predicament, the company’s Board of Directors approved a 1-10 reverse stock split back in July to stave off being delisted from the NYSE, which would essentially boost the trading value of each share and bring it back in line with NYSE standards. However, the move still needs to gain shareholder approval, who will vote on whether to proceed with the reverse stock split on September 21, 2015.

Without a major reversal of the company’s fortunes, the reverse stock split appears to be the only avenue to cure the price condition. Under NYSE rules, the Company has six months following receipt of the notification to regain compliance with the minimum share price requirement.

The Board … encourages all shareholders to vote in favor for the reverse stock split as this could ensure the avoidance of a delisting.

In a statement, FXCM was keen to point out that “the notice has no immediate impact on the listing of the Company’s common stock, which will continue to trade on the NYSE under the symbol “FXCM”. At this time, the Company believes that neither the notice nor a possible future delisting will have an impact on FXCM’s business operation or its activities as an online FX trading broker.”

Share this article
Tags: fxcm / nyse
Got a news tip? Let Us Know

I told you all that the FXCM stock price does make a difference. If it didn’t, why the urge for shareholders to approve the reverse stock split? “…At this time, the Company believes that neither the notice nor a possible future delisting will have an impact on FXCM’s business operation or its activities as an online FX trading broker…..” This is bullshit statement for 2 reasons a) why list on the stock exchange in the first place if it doesn’t really matter anyway? b) where else will you receive funding from if you cannot get it from shareholders? FXCM is… Read more »

I have never understood why FXCM wanted to go public, other than the vanity aspect of it.

Other unlisted companies seem to be doing quite well.