The highly-anticipated Brexit vote in the United Kingdom parliament is only hours away. This evening British lawmakers will begin to vote on Theresa May’s Brexit plan and ultimately decide the fate of the region.

The markets will be watching the vote closely, as it could ultimately lead to a general election and a second referendum, should things not go in the prime minister’s favour. Because of this, many brokers have been preparing themselves for volatile markets.

Large swings in the price of major currencies can be problematic for brokers and traders alike. Back in June of 2016, following the big Brexit vote, many brokers struggled to meet their customers’ demand as there was a squeeze on liquidity.

Furthermore, large changes in major currencies can cause hundreds of millions in losses, as was the case when the Swiss National Bank loosened its grip of the Swiss franc (CHF) back in 2015 and removed its peg against the Euro.

One such broker to feel the bite of this market shock was FXCM, which saw its shares plummet by 88 per cent in pre-market trading to $1.49 each the day after the CHF soared to unprecedented levels, resulting in huge losses for the broker’s clients.

In an attempt to reduce the fallout from a Brexit vote, many brokers are putting safety measures in place. This includes putting caps on leverage to reduce risks, warning their client base to expect large swings in the GBP and other methods.

So with another likely market shock on the way, what is FXCM doing this time? Speaking to Finance Magnates, a spokesperson for FXCM said: “FXCM has increased margin requirements on Friday, 11 January at 3 pm ET in preparation for potential volatility around the UK Parliament vote on Brexit.”

Saxo Bank, a multi-asset broker and one of the largest in terms of trading volume, originally put its Brexit safety measures in place back in December, when the vote was initially meant to be executed on the 11th of the month.

The Danish broker has increased margin requirements for GBP pairs. The initial margin for retail traders is 3.33 per cent, however, surrounding and during the vote, the margin has been increased to 5 per cent.

The maintenance margin has also been increased by 2.34 percentage points from 1.66 per cent to 4 per cent. For professional traders, the tiered margin has been raised to 4 per cent, up from 2.5 per cent for the Brexit vote.

Furthermore, Saxo Bank told Finance Magnates that they will be monitoring the situation closely.

When Finance Magnates reached out to CMC Markets, a UK-based financial derivatives dealer, CMC responded with the following statement: “In anticipation of the risk of extreme volatility in the financial markets as a result of the House of Commons vote on the proposed Brexit deal agreed by the UK and the EU on Tuesday 15th January, CMC will temporarily raise margin requirements on a number of its products for some of its clients, from the end of day on Monday 14th January until the following day.”

“CMC is committed to assisting its clients through periods of market uncertainty and maintains robust risk management processes to ensure it offers its clients the best possible service.”

Other brokers such as XTB, Dukascopy, Vantage FX, Admiral Markets, GKFX, Forex Club, AMarkets and IC Markets have also released press statements regarding the upcoming Brexit vote and the measures they will be taking. 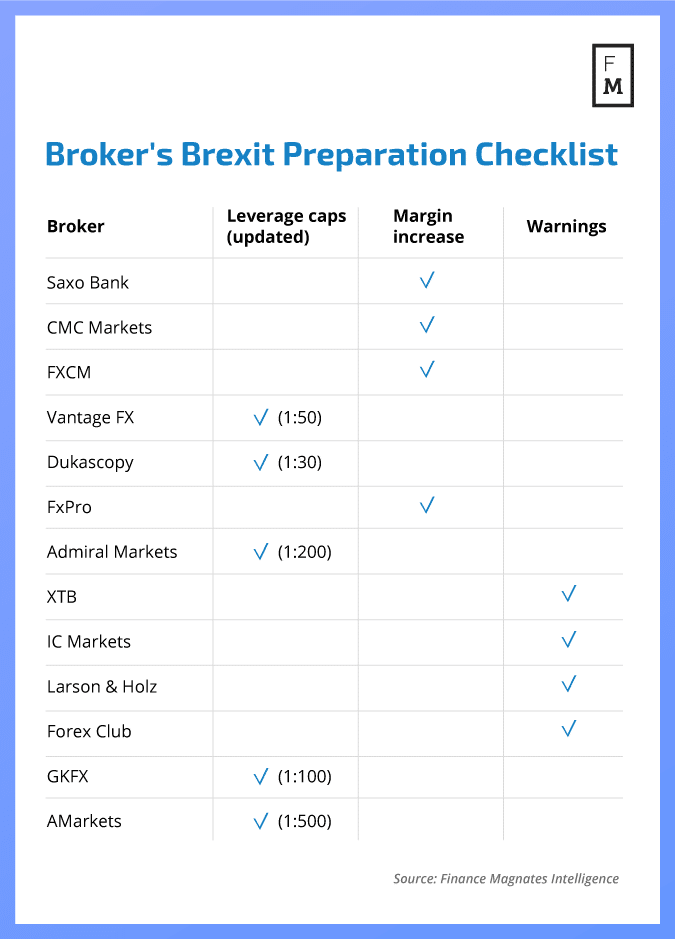 Specifically, Dukascopy reduced its maximum leverage to 1:30 for GBR.IDX/GBP, BRENT.CMD/USD, LIGHT.CMD/USD and GBP related FX instruments, applying the caps to all trading accounts without exception.

Vantage FX also announced via an email to its clients that it would halve leverage for GBP/USD, GBP Crosses and UK100, from 1:100 down to 1:50. Admiral Markets, on the other hand, has reduced leverage for its professional traders to 1:200 for forex and selected commodities.

All currency pairs except for Czech koruna and Russian ruble will be subject to the cap along with Gold, Silver, WTI, Brent, XAUUSD-ECN, XAGUSD-ECN and XAUAUD-ECN. Leverage on indices and select futures-based instruments will be limited to 1:100.