Brent crude for November delivery advanced $1.38 or 3% to close at $46.83 a barrel Friday. The futures price briefly traded above $47 a barrel before returning lower. For the week, Brent plunged 6.2% after a four-day losing streak sent prices to three-week lows.

Oil prices ran into volatility last week, as the combination of rising US crude inventories and a strong dollar weighed on investor sentiment. Markets also digested remarks from Saudi Arabian energy minister Khalid al-Falih that the kingdom was not planning to intervene in the oil market, casting doubts about the upcoming production talks in Algeria.

Markets began to stabilize on Friday after Russian President Vladimir Putin called on the Organization of the Petroleum Exporting Countries (OPEC) to agree to limit output when they meet at the International Energy Forum September 26-28. The Russian leader said he would even favour a deal that offers leeway for Iran to continue ramping up production to pre-sanctions levels.

“Iran is starting from a very low position, connected with the well-known sanctions in relation to this country,” Putin said in an interview with Bloomberg on Friday. “It would be unfair to leave it on this sanctioned level.” 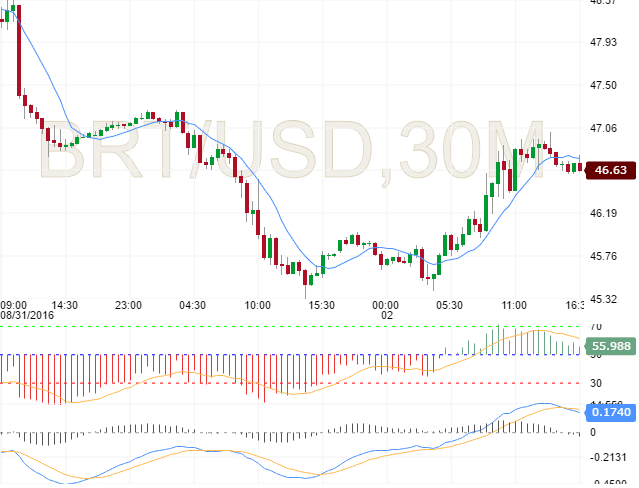 Experts remain skeptical that major producers will come to terms on a production freeze later this month. Even if a deal were reached, compliance would be a major issue, especially at a time when OPEC was continuing to defend market share. Saudi Arabia recently reported record oil output, while Iraq continues to ramp up exports from its southern ports.

In the United States, drillers have added active oil rigs in nine of the past ten weeks. The number of oil rigs operating in US fields rose by one to a total of 407 in the latest week, according to data from energy services provider Baker Hughes. Compared to the same time last year, drillers are operating 255 fewer rigs.

Increasing rig counts suggest US drillers are looking to expand production, and are highly responsive to rising prices.

Commodity traders also monitored a disappointing US jobs report, which virtually erased the possibility that the Federal Reserve will raise interest rates at its policy meeting later this month. US employers added 151,000 workers to payrolls in August, falling short of expectations calling for 180,000, the Labor Department reported Friday.

Continued low-rate stimulus by the Fed will help keep the US dollar in check, which could provide temporary relief for greenback-denominated commodities, such as oil. The US dollar declined sharply following the jobs report, but quickly rebounded to finish 0.2% higher against a basket of currencies Friday.