Cocoa prices plunged to three-year lows Thursday, as investors continued to weigh supply/demand forces ahead of the crucial harvest season.

Demand for the agricultural commodity that is used to make chocolate and other consumer goods is coming off a year in which demand outstripped production, raising concerns about a supply shortage. However, the outlook appears to have shifted after Barry Callebaut, the world’s biggest cocoa producer, reported an 8.7% drop in quarterly profit. The company cited sluggish global demand for cocoa products as the main reason behind the drop. 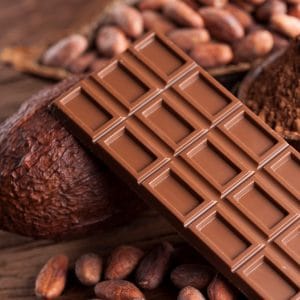 Despite recent concerns about undersupply, some market participants are forecasting a cocoa surplus of 250,000 tonnes for the 2016-2017 harvest.

Cocoa products were in the news this week after Swiss company Mondelez International announced it would change the shape of its iconic Toblerone chocolate bars sold in the United Kingdom. The company cited “higher costs for numerous ingredients” as the reason for the change.

“…we had to make a decision between changing the shape of the bar, and raising the price. We chose to change the shape to keep the product affordable for our customers, and it enables us to keep offering a great value product,” the company said on the Toblerone Facebook page.

Consumers have already voiced their outrage, taking to social media and even the BBC to express their grievances.

Mondelez International’s stock plunged 4.8% on Thursday, its second consecutive drop. Just two days prior, share prices were trading at four-month highs. Clearly, chocolate is a very serious business. According to industry research, the global chocolate market is expected to reach nearly $132 billion by 2019, up from $98.3 billion in 2016.

Cocoa prices have plunged over 20% since the United Kingdom voted to leave the European Union June 23. The Brexit vote triggered the biggest selloff in the British pound’s history, which also weighed on the price of cocoa in GBP terms. The British pound is widely used in negotiating and settling physical cocoa sales.

The pound plunged to a 168-year low last month after British Prime Minister Theresa May said her government would pursue a “hard Brexit” next year. May’s path to a hard exit from the EU ran into a major roadblock earlier this month after British lawmakers said the question of EU membership had to be settled in Parliament. May responded by saying she will issue a royal prerogative to invoke Article 50 of the Lisbon Treaty, which formally initiates the two-year Brexit negotiation.

Share this article
Tags: commodities / Community
Got a news tip? Let Us Know