In the case of Japan, a rising tide does not necessarily lift all boats.  Back when the narrative was focused more on the United States in the wake of the last financial crisis, the idea was that central bank balance sheet expansion would help everyone with exposure to financial assets, namely stocks. While working in theory, in practice the results are markedly different.

Valuations have indeed risen, but one of the byproducts of quantitative easing is a widening of the wealth gap.  Although the results would conceivably be repeatable, the Bank of Japan’s impact has not shown comparable success.

Even after opting to expand the ongoing Quantitative and Qualitative Easing (QQE) program during its December meeting, the Nikkei 225 has steadily trended lower since the announcement, intensifying the pressure on policymakers.

With fundamental conditions still deteriorating, finding the silver lining for the Nikkei is especially challenging in the current market environment.

Purchases Not Making a Difference

The immense pressure placed on the Bank of Japan by Prime Minister Shinzo Abe has failed to produce the desired results, namely to spur inflation in the economy and ward off deflation.

In order to produce more inflation, the Bank of Japan has eagerly added to its asset purchase program and continues to load up on exchange traded funds (ETFS).

At present, the Central Bank has a massive footprint in the market, already owning in excess of 50% of the total amount of outstanding ETFs.  This could mean that the Bank of Japan is forced to look elsewhere to add purchases in upcoming monetary policy meetings.

Although the April meeting is not expected to produce any changes to the asset purchase plan, there is room for expansion of the QQE program or another rate cut. While this might help reverse the yen appreciation, only under those circumstances will it translate to a net positive for the Nikkei 225.

One of the most readily visible impacts of the rapidly unwinding Japanese yen carry-trade has been the tumbling valuation of the Nikkei 225.  Following the pattern of most advanced economies, when the local currency strengthens, it makes local shares more expensive in comparison to foreign counterparts that engage in the same business.

As a result, this adds to selling pressure in the Nikkei 225 on a relative value basis, especially as investors pull back from risk-taking and increasingly demand haven assets to offset the climbing external and internal risks.

Considering these factors, exposure to Japanese stocks is on the decline, underlined in large part by the exodus of global asset managers.  According to research conducted by Bloomberg, the first 13-weeks of 2016 saw foreign investors pull $46 billion out of Japanese equities, highlighting the confidence problem facing Japanese officials as they work intensely to get the economy and inflation back on track.

The performance of the Nikkei 225 has largely reflected these developments, with the index recording a one-year performance of -20.27% and trading firmly entrenched in a bear market.

Thanks to the rising yen denting competitiveness of exporters, any further upside in the currency could add to downside pressure acting on the Nikkei 225.  Looking at the correlation between the USDJPY pair and the Nikkei 225, the relationship is very evident.

Although the correlation is not 100%, the similarities in the trajectory of prices are stunning.  Officials at the Bank of Japan have highlighted their willingness to intervene to weaken the yen previously, so any further interventions could be a risk factor for bearish Nikkei traders.

However, according to comments from former Japanese Finance Minister Eisuke Sakakibara, the USDJPY pair could hit 100.00 by the end of the year, a factor that may lead more investors to abandon the Nikkei 225.

Thanks to the startling losses over the last few months, the Nikkei 225 benchmark equity index is firmly mired in bear market territory.  Although the longer-term trend is to the downside, on a more medium-term basis, a trendline drawn under recent lows forms the basis for a triangle consolidation. 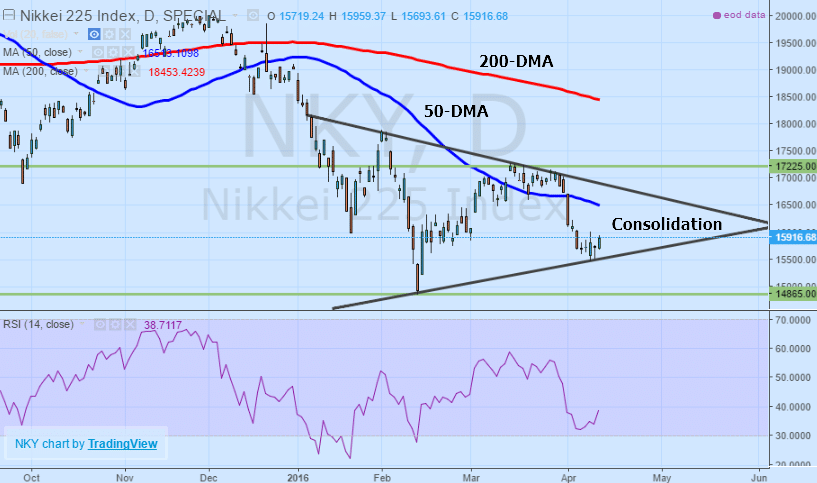 Trading the consolidation range is not suggested due to shrinking reward potential and expanded risks with the real play being the breakout which will be likely be accompanied by renewed directional momentum.  Looking at the indicators such as the moving averages, both the 50-day and 200-day moving averages are trending lower but above the price action, acting as resistance against any prolonged rebound in the index. 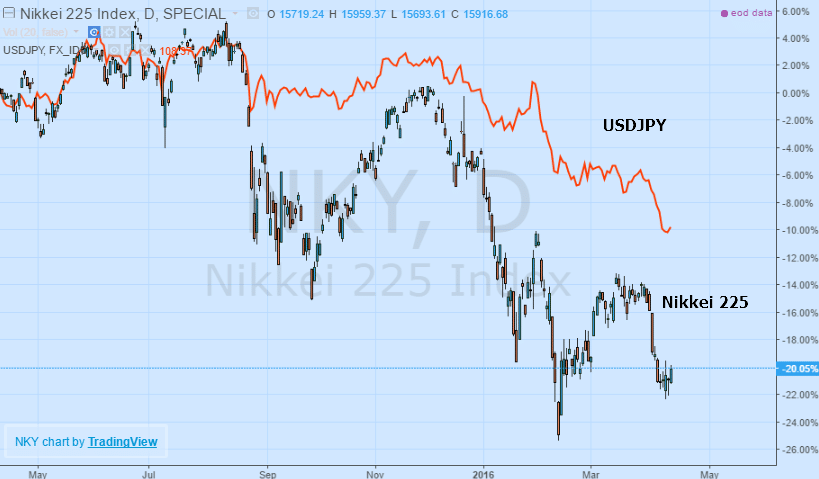 Although the Nikkei could rally as high as 16500, it is likely to encounter difficulty when trying to cross this level.

There is certainly the potential for the Nikkei 225 to rebound further in the coming weeks should speculation of another expansion of QQE prevail.

However, based on the level of foreign investor capital outflows and difficulty the Bank of Japan is encountering when trying to devalue the yen, the probability of an upside reversal is increasingly slim.

Combined with reduced confidence in the Bank of Japan’s ability to stoke inflation, these factors will continue to weigh on the Nikkei 225 valuation.

Additionally, if the USDJPY carry-trade continues to unwind, a more expensive yen will have a negative impact on the index’s valuation.  Even though there is a possibility for the Nikkei to rally on the back of an intervention in the yen,downside risks continue to mount, hurting the outlook for the Nikkei 225.