2018 has almost come to an end, so we here at Finance Magnates thought that now would be the perfect opportunity to take a look back at the past year and identify the trends experienced in the foreign exchange (forex) industry, particularly in relation to trading volumes.

During the past 12 months, the forex sector has had a lot of changes. The most notable, of course, was in Europe with the European Securities and Markets Authority (ESMA) implementing a suite of regulatory changes. However, trade war tensions, financial crises, low market volatility, and the ever-growing cryptocurrency space has changed the industry globally.

Retail brokers after ESMA: is global expansion a must? https://t.co/WeoSvmpROi #regulation #FX pic.twitter.com/VPJ50ARy8V

As a result, all of these changes have had an impact on FX trading. So what patterns have emerged over the past four quarters (Q4 2017 – Q3 2018)? Based on data sourced by Finance Magnates Intelligence, which has accumulated trading volumes from brokers worldwide, there are a few patterns that emerge. 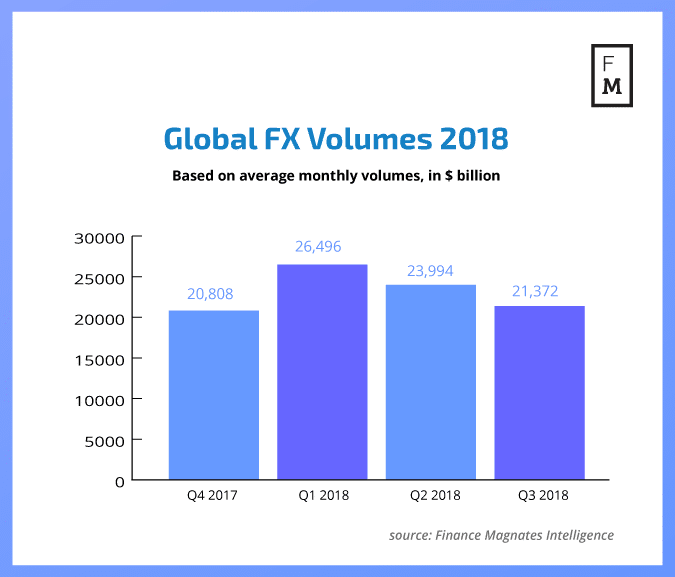 Taking a global view, we can see that the weakest quarter overall for the past four quarters, is in fact, the final quarter of 2017. During Q4 of last year, total forex trading volume came in at $20.81 trillion. This is around 21.47 percent less than that achieved in the first quarter of 2018, which was $26.5 trillion.

Unsurprisingly, the second weakest period was the third quarter of this year. For the forex industry, the three months from July until September, are typically plagued with lower volatility thanks in large part to the summer season.

However, during this quarter trade tensions between the United States and China were heating up, which drove traders away from forex trading, and ESMA hurt brokers in the European Union by imposing trading restrictions, which impacted leverage levels and marketing practices.

To see how this impacted the trading volumes of some of the top brokers in the forex industry, you can read our previous analysis here. Specifically, we saw some of the top EU and UK brokers record a sharp fall in FX volumes during the third quarter, whereas Australian brokers actually managed to achieve an uptick in trading activity. 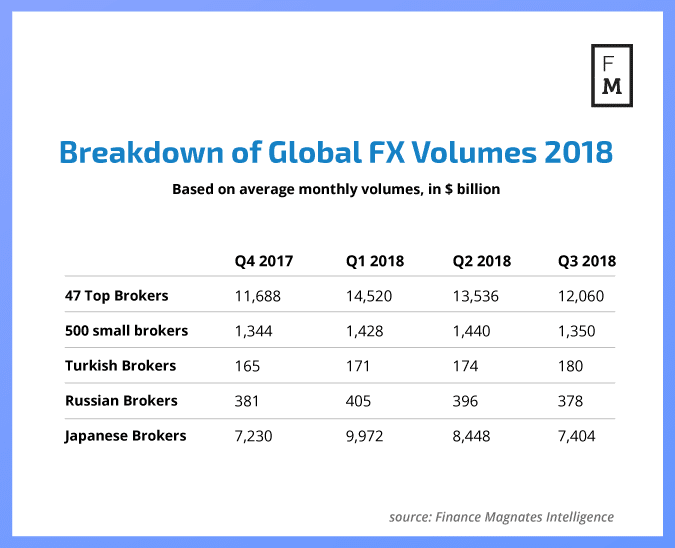 As can be seen, one country, in particular, recorded figures that go against the global trend. That country is Turkey. For those who have kept up to date with financial news, it probably comes as no surprise that Turkey is an outlier here.

2018 has been a difficult year for Turkey, with the country facing a financial crisis and its currency, the Turkish lira (TRY) fell to historically low levels, losing 45 percent of its value against the US dollar by mid-August since the start of the year.

As a result of the falling TRY, numerous forex brokers suspended trading in the currency. As Finance Magnates reported, one such broker was Alpari, who cited “economic instability” in Turkey as the reason behind its decision. However, swings in TRY have calmed down after the country’s central bank hiked interest rates to combat rapidly-rising inflation.

Russia also went against the trend, with the third quarter of this year being its lowest in terms of FX trading volume, coming in at $126 billion. However, this is only 0.8 percent less than Q4 of 2017.

Japan, which has a large FX trading industry, is home to giant brokerages such as Nomura Securities, Mitsubishi UFJ, Mizuho Securities and Daiwa Securities. As is the same with global volumes, the country’s first quarter ($3.32 trillion) far outperformed the other three quarters and had a trading volume which was 27.5 percent higher than Q4 2017, and 25.8 per cent stronger than Q3 2018.

Retail forex industry with those cyprus kebab shops is the only industry in the world which provides absolutely zero value to the client/trader. Brokers make money on client losses. Why don’t they put retail FX under gambling license?

At least Cyprus retail FX brokers carry a heavily regulated license that safeguards the retail brokers in case of losses or failures. Also, under ESMA new rules they have to visibly declare the client trading loss rate on their ads and web sites.

I for one Make money with my FX trading account. As an FX traders in the USA, I have seen regulation in the name of (PROTECTING THE CONSUMER AND PROMOTING TRANSPARENCY ) in 2010. If you look into the genesis of those FX regulations you will learn they were proposed by a handful of Gents who run the NYSE; the purpose of which is obvious. Their recommendations, making it illegal to hedge, and the first in first out rule make it almost impossible for the retail FX trader to come out ahead. This affected Canada and the USA. These latest… Read more »