This week’s key event is the European Central Bank’s meeting on March 10. Traders expect the ECB to lower projections for growth and inflation at the Thursday meeting and to take further action.

From the December meeting when the ECB announced stimulus measures that were widely perceived as less than the market expected, the eurozone economic outlook and inflation have since weakened. Additionally, leading indicators have fallen short of expectations. Draghi may not want to repeat the disappointment that took place after the December meeting so he may move aggressively.

At the March 10th meeting, look for the ECB to lower projections for growth and inflation slightly for the coming years. President Draghi is expected to emphasize that the ECB’s revised inflation assessment contains downside risks since the recent declines in headline and core inflation will likely not be incorporated in the updated projected outlook due to limitations in data-gathering.

The ECB may also loosen or remove the deposit rate floor constraint on the purchases in the public sector purchase program (PSPP) and further broaden the universe of eligible assets than to remove the capital key or bond specific limits.

This means that rather than lowering rates further into negative territory, an unconventional method that seems to have worn out its effectiveness, the ECB may shift its focus to asset purchases by implementing a tiered deposit rate on excess reserves. 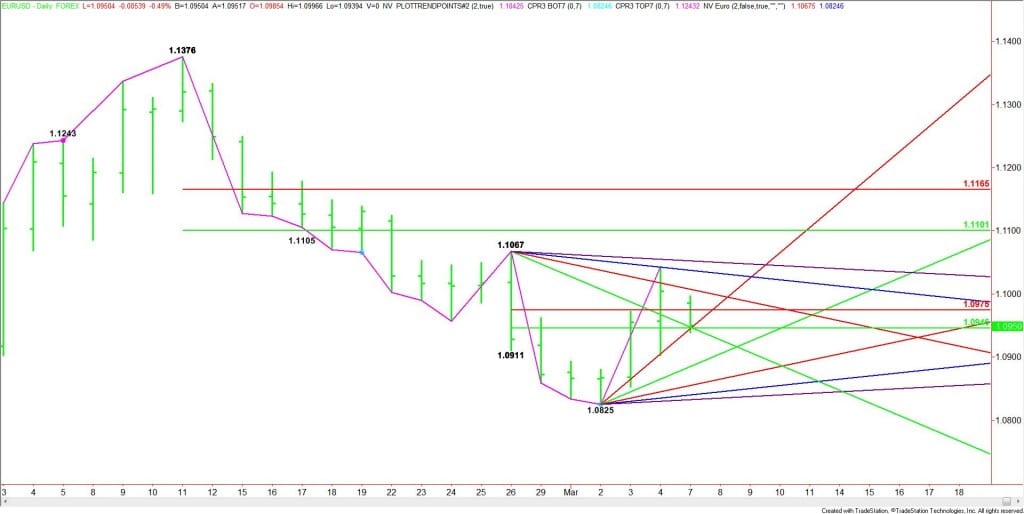 Specifically, the deposit rate may be cut by at least 10 basis points. Additionally, there may be an increase of 10 billion euros ($11 billion) to $20 billion euros in monthly asset purchases and an extension of the program.

Technically, since the revisions have been widely hinted at for several weeks, the markets may have already priced in much of the aggressive action. This may be the reason for the strong short-covering rally late last week.

If the ECB announces a more aggressive plan than traders expect and the U.S. dollar picks up strength then we may see a sell-off through last week’s low at 1.0825. This would put the EUR/USD in a position to eventually challenge the December low at 1.0539, the April 2015 bottom at 1.0520, or even last year’s low at 1.0462.

These bottoms were all reached during a strong dollar environment when the Fed was more hawkish about interest rate hikes than it is now.

If the ECB announces an aggressive plan and the market remains unclear about the direction of U.S. interest rates then the reaction by traders should be relatively mild since most of the news has already been factored into the price action. This will likely mean just another test of last week’s low at 1.0825.

Going into the report, we may see a choppy, two-sided trade on both sides of a short-term retracement zone at 1.0946 to 1.0975. After the release of the report, traders should expect better than average volatility until the major investors can determine its longer-term impact on the euro.

The key for short-term traders will be determining how much of the report has already been priced into the market. Shortly after the release of the report, investors are going to shift their focus back to the Fed and its 2-day central bank meeting on March 15 -16.