Chairman and CEO of Japanese Monex Group, Inc.(TYO:8698), Oki Matsumoto, has just announced a revenue forecast change for the U.S. subsidiary following the transfer of its MT4 business earlier this month.

The group’s forecast is that a capital loss of $16 million will be realized due to a transfer of all retail accounts in the MT4 division of the U.S. subsidiary’s forex businesses. The impact to net income attributable to owners of the group will be a loss of $14 million in the Fiscal Year Ending (FYE) March 2015.

The group also explained that most of the loss will be recorded in the 2nd quarter of FYE March 2015. Monex expects the “goodwill” of the U.S. segment to change to
$97 million before the transfer, and $83 million (forecast) after the transfer.

The group added that a $0.8 million loss for MT4 related business was recognized as net loss before income tax in the 1st quarter of FYE March 2015. Monex is expected to record an improvement of the same amount in profit every quarter in and after FYE March 2016.

On September 5, it was revealed that American broker FXCM had acquired all of the U.S. and Australian MT4 accounts of IBFX, Monex’s U.S. subsidiary. According to the official press notification at the time, FXCM reported that it will be acquiring approximately $63 million in client equity and 13,000 accounts.

In a separate announcement, Monex informed investors that it is planning
a payment of interim dividends for the Fiscal Year Ending March 31, 2015.

The Japanese group’s policy for shareholder’s return is to pay out dividends based on the higher of 50% of the consolidated net income attributable to owners of the company for the current fiscal year or DOE (Dividend On Equity) ratio being 1%, and to continue to pay out interim dividends.

The company’s decision was determined by its forecast of interim dividends for this fiscal year based on 1% of DOE, in accordance with the status of net income attributable to owners for the first half of the current fiscal year, as indicated in the following chart: 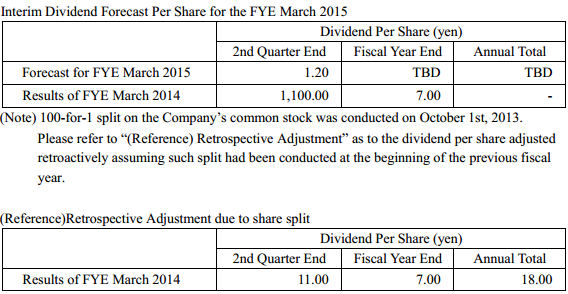 Quite a loss on the IBFX trade….

why did they not wait another year or two for volatility to improve? they bailed so quickly on IBFX, which could have been a potential money maker.