Under its public company structure and through its subsidiaries, operating multiple business lines involved in agricultural commodities, precious metals, foreign exchange, futures, securities and derivatives, among other asset classes, the firm’s full-year earnings of $12.4m and a Return on Equity (RoE) of 4% were below the company’s targeted returns, according to Sean O’Connor, CEO of INTL FCStone Inc., as quoted in the announcement:

“Full-year earnings of $12.4 million and a Return on Equity of 4% were below our targeted returns. Fiscal 2013 was a difficult year due to low interest rates, low volatility and commodity prices, increased costs of regulatory change and our exit from the physical base metals business. Nevertheless, we remained profitable in this challenging environment and continued to consolidate our position as a leading provider of financial market access to mid-market customers.”

In late 2013, Forex Magnates’ reporters spoke to INTL FCStone’s CEO Sean O’Connor, regarding the unaccounted figures that had been internally identified and subsequently reported in regulatory filings, as well as the market’s knee-jerk reaction to the news.

During this time the company was still trying to determine the extent of the accounting error, and has now fully reconciled and reported the figures as restated in its latest results. Full Year Financial Statements are expected to follow in its next filing, and today’s figures provide a high-level overview on some key metrics.

The previously misstated errors (which can be seen below as minor) were the blame for the challenges surrounding the integration of the acquired Hanley swap business, as different backoffice systems with different valuation models had been used, requiring manual reconciliation including the time which those clients were transferred into its legacy system (from the Hanley run system). The firm said no clients were affected. An excerpt of the restated figures shows the annual impact at less than 1% or less over the three years affected: 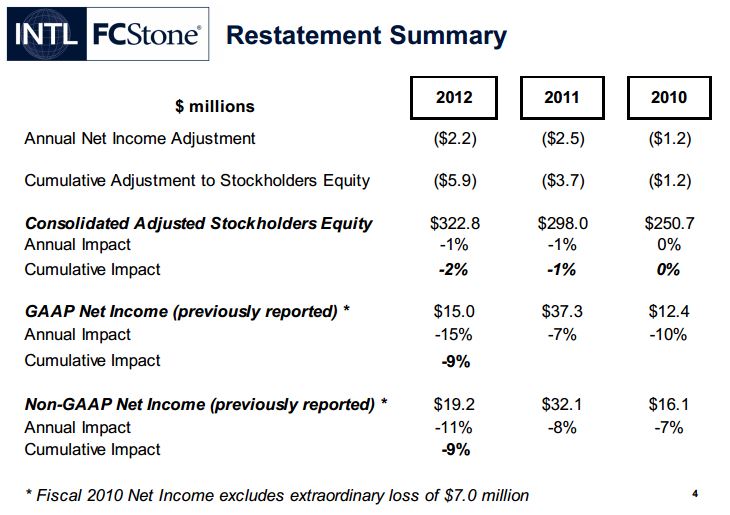 During a conference call to recap its earnings presentation yesterday, the CEO was joined by the firm’s CFO Bill Dunaway, and noted regulatory changes as a driver of a long-term consolidation of the industry to which INTL FCStone is well positioned to be a beneficiary (of such a consolidation), and Mr. O’Connor said regarding the regulatory landscape, “It’s a game for scale players who can afford the minimum infrastructure and costs.”

Also cited was the number of FCMs that had declined and how that number would further drop to around 75 – from the current number which according to NFA stood at 81 as of December 31, 2013. This indicates  that there are now more registered swap dealers than registered FCMs, although both figures could further consolidate. Swap dealers are subject to some 715 regulations according to O’Connor, comparing to a few years ago when there were nearly zero regulations for swaps.

Foreign Exchange Revenue Up 3% Over Q3, Tapered from Lower Volatility

Its proprietary foreign exchange arbitrage trading desk, which looks to capture differences between the forex cash and forex futures markets, had a 54% decline in operating revenue to $1.2m as compared to the prior year’s which was attributed to low volatility.

Operating revenue from Foreign Exchange were reported up 3% in Q4 to $15.6m, up from $15.2m in the prior year quarter, and current quarter operating revenue was down 18% vs very strong revenues of $19m in Q3.

INTL FCStone’s securities segment, consisting of securities market-making and debt capital markets, had revenues up 66% from $11.1m in prior year to $18.4m in current year quarter, and up 33% from $13.8m in equity market-making side. Clearing and related costs are the firm’s second highest expense which accounted for nearly $30m in 2013.

The firm said it had gained market share in its equity’s line, and had retail type flows from institutions, and benefited from the equity market’s recent record highs, as well as its previous acquisition of TradeWire which now had a full-year reporting as opposed to a partial year in the company’s prior results.

The broker recapped about its planned exit from its physical base metals business but how that hasn’t affected the firm’s (non-hedging) metals trading on the London Mercantile Exchange (LME). The biggest hit was in its commodities line, including commodity risk management.

An excerpt from the earnings presentation discussed in a conference call with the firm’s CEO and CFO, highlights Q4 from a Year-over-Year perspective along with the firm’s target for respective values and the variance for each when comparing time frames. 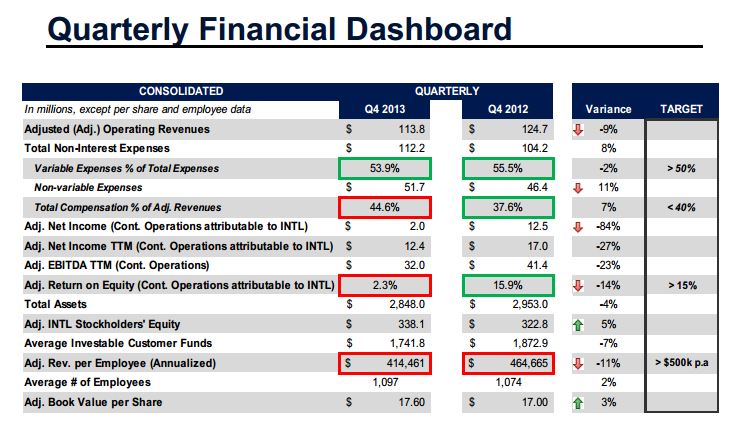 The broker was positive about its global payment business -which does not deal with retail clients directly – that was up 6% from $9.8m to a record $10.4m, with the volumes of payments making up 16%  – as commercial banks continue to be added, and a successful new back office platform was integrated with the ability to handle more volumes and smaller payments without additional personnel.

FX Payments Business Gets New Platform, Evolves Towards No Touch

In response to an analyst’s questions during the conference call about its payments business, on an annual basis full-year $41m adjusted operating revenues were noted with a $20.5m segment income (measure of profitability before central overhead) for full-year 2013, compared to prior year up 5% in revenue (and down 5% in segment income related to system costs associated with integrating the new back office platform and getting it up and running).

The firm’s management added how the business has matured and evolved in order to serve its clients needs (and has made considerable investment to shift from manual to no-touch technology structure), as well as targeting new customer types such as large multi-nationals, in addition to charities, non-governmental organizations(NGOs), and governmental organizations.

A 1% increase in commission rate per contract offset a drop in trading volume during Q3 for exchange traded volume, a similar trend had been noted for a portion of CMEs business as last reported by Forex Magnates for December.

With a staff headcount of 1,097, the company says it serves over 20,000 accounts, representing approximately 11,000 consolidated customers in over 100 countries through a network of offices in twelve countries around the world.

Shares of INTL on the Nasdaq closed up nearly six-tenths of a percent yesterday at $18.63 per share, but have not yet recovered from the drop from above $20.00 after the firm announced its uncovering of misstated figures which have now been rectified as per the above restated figures.

The company is planning to rebalance its quarterly stock buy-back/re-purchase mechanism following a delay due to the delayed 10K regulatory filing (as a result of the extra time needed to reconcile the above restated figures). The filing containing its annual report is expected some time over the next 2 weeks, after missing the December filing date.