Investment Trends, the global research house that studies international trading and investment trends, has released a study of the trends and behavior of German CFDs and forex traders.

The study points to some peculiar patterns.

The study was conducted in March 2017 and shows that the number of active traders of CFDs continues to rise despite a general drop in volatility in the stock markets. There were at least 53,000 unique traders who placed at least one trade, which is about 6% more than last year.

“The German OTC leverage trading market held its own despite the challenge of relatively low volatility,” said Dr Irene Guiamatsia, Research Director at Investment Trends. “This result was also achieved despite the impressive run of the DAX– up 21% over the period – as traditional investment products would have presented an attractive alternative to leverage trading. Continued strength in the equities markets could continue to stifle growth in leverage trading.” 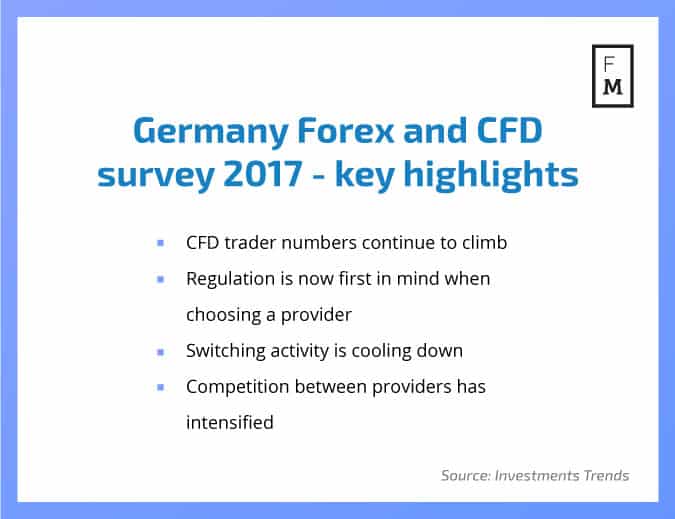 Getting the next set of traders going might prove to be a challenge though, as the number of traders waiting to get started has declined. New traders are also likely to have regulation as one of their primary worries when they go shopping for a platform to trade on.

The growth in the number of CFD traders is likely to concern the German regulator Bafin which sought to control and regulate CFD trading last year by announcing a slew of measures that limit the extent to which providers can advertise CFD products. It also announced that no CFD products can carry additional payment obligations (i.e. negative balance risk), in a move to protect investors from the risk of incalculable losses.

The report said that more than one-third of the 7000 respondents said that they chose their current platform as it was regulated, though there did not seem to be any preference for locally regulated platforms. The number of traders switching from one platform to another also seems to be going down, with traders preferring to stick to their current ones, as evidenced by the fact that only 13% of respondents had switched provider, down from 17% last year.

Traders seem to prefer having multiple accounts at the same provider rather than holding accounts across providers, and the average number of accounts has hit two per trader.

“Declining switching activity is consistent with a growing willingness among German traders to keep a previous account even as they move on to a new provider,” said Guiamatsia.

This decline makes it a difficult market for new entrants, as they would need to diversify in order to make their offering more attractive and entice traders to switch from their existing provider. This ratchets up the stakes involved in the provider industry as they compete for the attention of the increased number of traders.