The Foreign Exchange Committee (FXC) has today, January 28, 2014, released the results of its nineteenth Survey of North American Foreign Exchange Volume, regarding the October 2013 reporting period.

The committee is an industry group that was formed in 1978 under the sponsorship of the Federal Reserve Bank of New York, and provides guidance on currency markets and is in coordination with central banks around the world.

The North American Survey found that the Average daily volume (ADV) in total over-the-counter (OTC) foreign exchange instruments (including spot, outright forward, foreign exchange swap and option transactions) was $816 billion in October 2013. The October total was 19% lower than the average daily volume during the April 2013 survey period, but 3% higher than a year earlier. 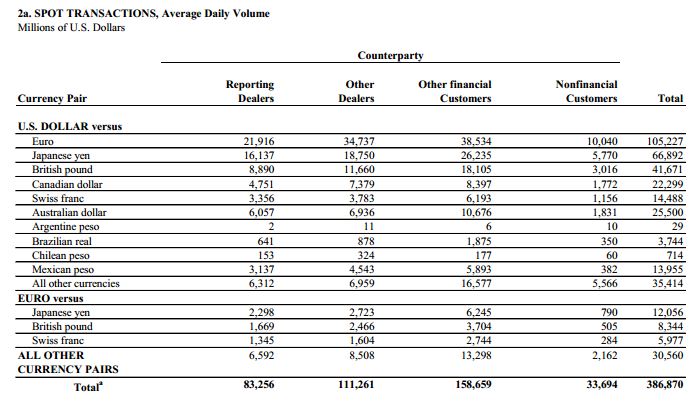 The Average daily volume decreased across all instrument types since the last survey, but
most significant declines in turnover on a percentage basis were in OTC options and
spot, which decreased 40% and 26%, respectively.

The committee emphasized that while the decline in turnover occurred across most participant types, it was particularly pronounced for “other financial customers”, which accounted for over half the decrease in total average daily volume.

The complete data of the survey can be found on the New York Fed’s website, at this link (PDF).

Share this article
Tags: otc / spot
Got a news tip? Let Us Know

Good coverage, I am going to add US FX data shortly, but in the meantime, here is link to my coverage of the Bank of England Semi-Annual FX Survey data that came out this afternoon.

So, “Non-financial customer” is retail – or are commercials in there too?