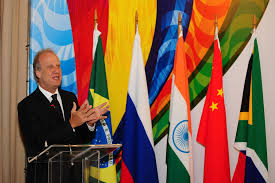 Emerging market countries that make up the BRICS nations have fast become a model for global economic growth after the great recession of 2008. With the group of five countries making up nearly half of the world’s population, and contributing to one fifth of global GDP, their relevance is increasing significantly. Leaders of Brazil, Russia, India, China and South Africa have unanimously agreed on a number of initiatives at the Summit that aim to strengthen economic and political ties between the group members.

The new institute could create a new ‘us’ and ‘them’ as developed economies in the EU and US will lose their influence. In 2010, G20 nations put forward a number of reforms in the governance of the IMF that would allow developing countries to play a more significant role. The US has 17% of voting rights in the global organisation.

Members of the BRICS have expressed their disappointment at the lack of progress in changes at the IMF, according to Chinese media: “We remain disappointed and seriously concerned with the current non-implementation of the IMF reforms.”

The great recession of 2008 highlighted the troubles developed economies face in an interoperable global world, with the concerns of low growth rates and unemployment shaping negative sentiment. However, picking up the pieces are the BRICS nations, a collection of five future superpowers who are expected to dictate to the modern world on economic and political matters.

The influence of the five countries is evident in their role in the global FX markets, the Chinese yuan formally entered the top ten most active currencies, according to the last BIS FX Survey (2013). The sixth Summit comes during a period of uncertainty triggered by events in Russia & Ukraine and the Middle East.

The BRICS currencies have been gradually stepping up the global ranks, the latest Bank of International Settlements Survey, which compiles data from central banks & international investment banks, showed that the Chinese yuan was the ninth most actively traded currency pair with 2.2% market share, a vast increase from its 2001 position where the CNY was in 35th place. The Russian ruble was the next best performing BRICS currency pair, at 12th position contributing to 1.6% in global trade. The South African rand, Brazilian real and Indian rupee were at 18th, 19th and 20th position respectively.

The sixth BRICS Summit, unlike previous events, comes at a time when reforms and developments are taking place in the major contributing nations. India is the talking point of the pact, under the guidance of newly elected Narendar Modi, the country is expected to stabilise the currency, reduce inflation and increase economic growth. The two-day Summit ends on the 17th of July, discussions on day two are expected to further strengthen the role of the BRICS.

“These initiatives show that, despite our diversity, our countries are committed to a solid and productive association,” Brazilian President Dilma Rousseff is reported to have stated to the media at the Summit.