‘b-next’, a specialist provider of technology for compliance purposes, has announced an additional tool aimed at tackling suspected market manipulation activity occurring at most top-tier banks around the globe. The ‘b-next’ Capital Markets Compliance (CMC) solution is a single integrated compliance platform used for detection of market abuse, insider trading and conflict of interest. The now expanded CMC suite also facilitates the monitoring of Derivatives/OTC markets and helps compliance teams ensure best execution and full reporting to regulatory authorities is done at all times.

The new tool called ‘CMC: Benchmark Fixing Analysis’ flags suspected market abuse and insider trading activity in the FX market in an attempt to stop collusion over the foreign exchange fix, a daily benchmark which is set each day among the largest inter-bank dealers, such as Deutsche Bank, Citigroup and HSBC.

The Root of the Problem

The FX industry is currently facing intense scrutiny from regulators with regard to traders at several top-tier banks around the globe who have colluded and manipulated FX rates to their advantage. Compliance departments across the financial industry have hurried to implement systematic surveillance of as many transactions as possible to ease problems with submitting timely trade report data and matching to market correctly.

CMC:Benchmark Fixing Analysis offers “numerous automated detection scenarios that identify suspicious trading activity at or around the time of the fix. It can be enabled for any currency pair for FX Swap and Non-Deliverable Forward (NDF). The solution provides alert analysis including market data, covering global trading activity,” said ‘b-next’ in a company statement. The company has been developing compliance tools since 1989. 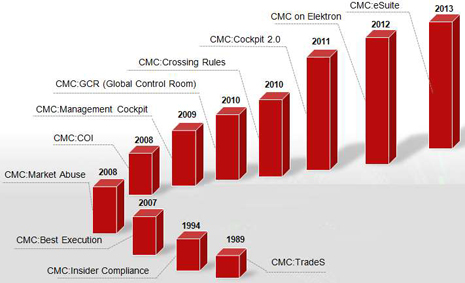 All data being utilized is aggregated and analyzed from a “global control room” covering all time zones simultaneously. Martin Porter, Business Development Director at ‘b-next’, commented: “The CMC:Benchmark Fixing Analysis responds to one of the biggest FX investigations into the financial industry since LIBOR, with 15 authorities across four continents being involved. As some benchmark fixings are based on verbal or system submissions, there’s a need for participants to implement monitoring solutions which handle OTC traded instruments and to adapt surveillance rules to regulatory recommendations.” Adding, “The combination of b-next software and Thomson Reuters data will enable firms to implement a more systematic approach to benchmark analysis.”

According to ‘b-next’, the CMC suite of products have been developed based on requirements from leading trading institutions and can be deployed in both hosted and in-house formats, according to ‘b-next’. Additional benchmarks covering alternative asset classes, such as interest rate products and LIBOR, are expected to be added over time.

Most of the world’s top-tier banks are currently being investigated as part of the most coordinated inquiries in the history of financial markets. The outcome of the investigations on FX manipulation could materialize by the end of this year in time for the G20 conference in Brisbane, Australia, scheduled for November 19th.

So far, the level of accuracy in detection of market manipulation has been rather poor considering the extensive level of market abuse and manipulation occurring without detection for several years. Although it has been ‘b-next’ competitors’ systems that have been widely implemented at banks, not ‘b-next’s’ integrated solution.

Mr. Porter says, “It is incredibly difficult to monitor FX trading due to its high frequency in terms of trades booked and off-exchange model. The banks involved in benchmark manipulation are using legacy systems with gaps in their surveillance technology. We launched a solution to plug the gap in those institutions because they are not doing adequate surveillance of FX trading activity. The benchmark rigging scandals recently exposed could have been detected by our systems – if banks implemented our solution which is able to work across different asset classes and can integrate both OTC and exchange markets”.

It seems that every regulatory agency, compliance department and automated risk warning system has failed simultaneously in multiple asset classes at multiple banks, in the lead up to the Global Financial Crisis (GFC). With powerful solutions being provided by companies such as ‘b-next’, it will be intriguing to see how banks and institutions apply them.

With the new layer added to b-next’s CMC suite, better monitoring and risk profiling is promised, but whether or not this translates into better due diligence, risk management, transparency and competition, only time will tell. This is because any system is only as good as its operator.

The bottom line is that any monitoring system must be applied by the bank itself rather than an external agency. If its Compliance departments that deploy detection systems, there is a risk of conflict of interest or internal business practises that prevent detection. Given enough incentive, people tend to find ingenious ways to cheat. Highly educated and IQ optimised bankers are no exception.

Market manipulation detection can work on a technical level but whether banks are actually interested in being compliant and transparent is a major debating point.