Last week saw several additions to marquee venues, including the appointments of multiple senior level executives in both the institutional and retail space. Catch up on all of the weeks biggest moves below.

Saxo Bank saw a key promotion on Tuesday, elevating Steen Jakobsen to the role of co-head of Global Sales Trading, adding to his existing roles as the company’s Chief Investment Officer (CIO) and as Chief Economist. The move was planned to help the delivery of the company’s SaxoStrats solution, which provides real-time insights and trading ideas to all of the Saxo’s client segments globally

Last week, Standard Chartered appointed Cheri McGuire as its newest Chief Information Security Officer (CISO). Her appointment will also see her become a member of the Bank’s Information Technology and Operations Management Team, placing her in a key position to help mold the group’s future ambitions in this space. 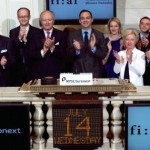 Axioma announced last Wednesday its latest senior move, the appointment of Amaury Dauge as its Chief Financial Officer (CFO). Mr. Dauge will be based out of the group’s New York office, following a relocation from Paris, where he was working most recently. He comes over to Axioma from Euronext, having worked in a similar role since January 2014.

Citigroup’s Head of its European Corporate Bond Syndicate, Sarwat Faruqi, parted ways with the lender last week, snapping a tenure lasting over two decades. Ms. Faruqi had been a an integral part of Citigroup, having been involved with a variety of the group’s operations, all based out of London.

Fiona Tee was appointed as the Chief Financial Officer (CFO) of Currency Cloud, an international Payments Engine provider last week, boasting nearly 30 years of financial and commercial experience within the technology and software industries. She previously held CFO roles at Mondex International and Intelligent Environments Europe, among others.

On Friday, the former Societe Generale executive Sebastien Domanico landed at Credit Agricole as its newest Global Head of Debt Capital Markets (DCM). Mr. Domanico had been active in the DCM space for the past sixteen years, having held senior roles at multiple venues and lenders.

Last week, Randolf Roth joined Eurex’s Zürich AG and the Supervisory Board of Eurex Frankfurt AG’s Board of Directors, which saw him tasked with the group’s newly created Market Design department. He will also be responsible for overseeing the general trajectory and evolution of Eurex’s market model.