Back in November, BATS named Chris Concannon as its Executive Vice President of transaction services. Mr. Concannon has been the President of BATS since 2014, following nearly two decades of experience as a senior level executive.

Moreover, as part of the move, Joe Ratterman will now be taking the position of chairman of the BATS board, succeeding Paul Atkins. Mr. Ratterman has served BATS as its CEO over the past eight years, and despite his move will remain an integral component of the company’s direction, whilst assisting in a transition to Mr. Concannon.

BATS Global Markets boasts the distinction of operating the largest stock exchange in Europe and the second-largest exchange in the US, forging a role as a key player in the financial industry – it also is eying a global FX market, pending regulatory approval. 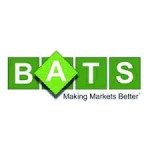 According to Mr. Ratterman in a recent statement on the transition, “Being CEO during a time of impressive corporate growth and considerable industry change has been a great privilege and I’m grateful to the entire BATS team for their extraordinary efforts, and for the opportunity to have worked alongside them over the last 10 years. It’s truly been a remarkable time.

We are at a unique point in our company history where we are experiencing high water marks in market share and profitability, and we are also poised for significant future growth and expansion globally. I see this as a good opportunity to change the nature of my role at BATS and take on the chairman responsibilities, and I’m pleased to pass the baton to a leader as qualified, talented and dedicated as Chris. He has already proven to be a great addition to the BATS team and I have no doubt that he will take the company to new heights.”

“I would also like to thank Paul Atkins for his exemplary service to BATS while leading its board over the last several years. We wish him continued success with his financial services regulatory consulting firm, Patomak Global Partners,” he added.

Prior to landing at BATS Global, Mr. Concannon served as the Executive Vice President at Nasdaq, manning crucial components of its business, namely across US stock and options markets. His most recent role however, was the role of president, chief operating officer (COO) and partner at Virtu Financial, between 2009-2014.

According to Mr. Concannon, “I came to BATS last year after getting to know the company as a competitor, customer and board member and immediately felt it was a great fit. It’s unique to become CEO of an organization with so many transformative opportunities on the horizon and I’m excited to build on the amazing track record assembled in such a short period of time. I look forward to great times ahead with my BATS colleagues as we grow together and expand our global presence.”

“When Joe came to the board last year and suggested it was time to appoint his successor, we appreciated the thoughtful way he laid out a smooth and extended transition plan. He has always put the company first, and his recruitment of Chris is a great example. The board appreciates the tremendous financial and operational growth under Joe’s leadership and how he has positioned the company going forward,” reiterated BATS Board Member Dan Keegan, Citi’s Head of Equities, Americas.

“During his time at BATS, Joe has set a high bar for the CEO role, and the board is confident that Chris is the right person to accept the challenge of raising that bar even higher. Chris’s history as an execution-minded leader, coupled with his uniquely varied market structure background and experience, make him an ideal fit for BATS, its employees, its customers and its shareholders,” Mr. Keegan noted.