The list of top five cryptocurrencies by market cap experienced a shakeup over the weekend.

Litecoin and Ethereum Classic entered the number four and number five spots respectively, following only Bitcoin, Ethereum and Ripple’s XRP. They are now worth over $2 billion each, marking the first time that all top five blockchain assets are valued at such a figure.

Litecoin, which only last month reached a record market cap of over $1 billion, is now worth a total of $2.6 billion. This is an increase of 260% in less than a month and a half. Ethereum Classic is not far behind at almost $2.2 billion for all ETC in circulation, after rising 14% from last week.

Combined with the rise of Ethereum and Ripple’s XRP, this all leads to a new low for Bitcoin’s dominance in the cryptocurrency ecosystem. BTC now accounts for only about 37% of the value of all blockchain assets in the world. Still, Bitcoin’s value remains a huge figure in its own right – over $42 billion – as the total market cap is now at a record $112 billion value. 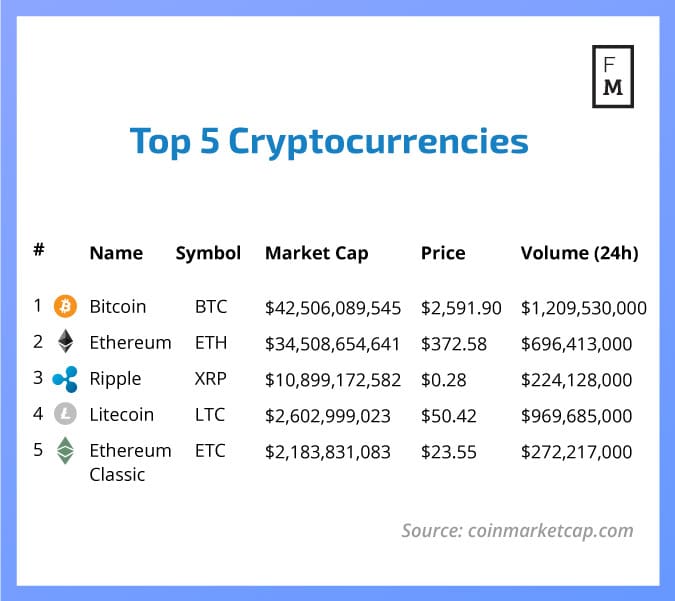 There are several recent factors that traders are linking to the rally in the prices of Litecoin and Ethereum Classic. These include technical advancement in the Litecoin blockchain and Chinese exchange BTCC decision to list ETC for trading.

However, it is also likely that much of the demand is coming from new traders who hope that the two cryptocurrencies will grow like Bitcoin and Ethereum, which are now considered very expensive to get into.