2017 has been a wonderful year so far for cryptocurrency investors but this week specifically might be remembered as the best of all time for altcoins. While Bitcoin was able to quickly shake off the bad press from the US SEC rejecting the Winklevoss twins’ ETF application, and stick to the $1200 level, competing blockchain tokens have seen their prices and overall values just explode upwards.

The smart contracts and decentralized apps platform Ethereum is now traded at around $40. This is an impressive price record for ETH, which completed a rise of about 40% over the last day and 130% in just one week. In total, the market capitalization of all Ethereum tokens in circulation is worth $3.6 billion. 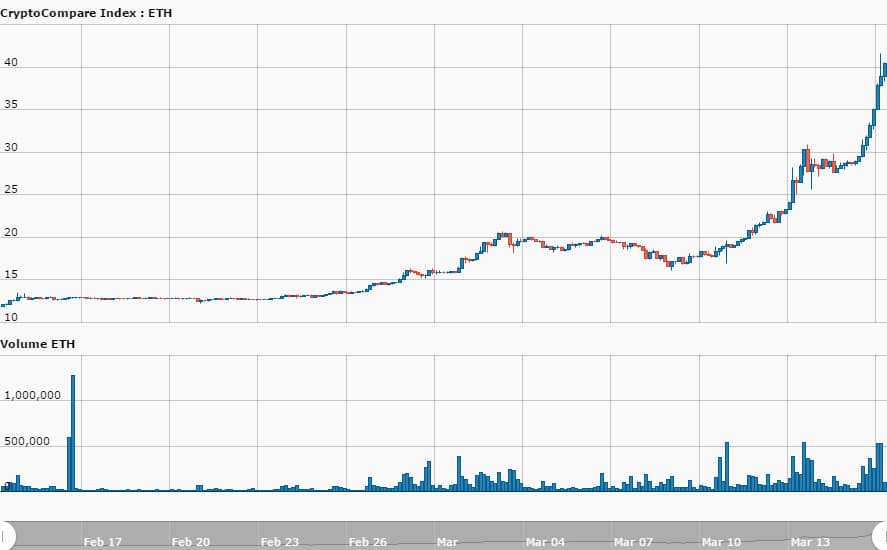 Already the second most valuable cryptocurrency by market cap, Ethereum is now chipping away in Bitcoin’s overall market dominance. At $20 billion dollars the first blockchain is now worth just 75% of the entire cryptocurrency ecosystem. In terms of trading volumes bitcoin is losing even more of its dominance of the market – at $440 million it is just about 44% from the market which saw a about $1 billion worth of cryptocurrencies and fiat changing hands over the last twenty-four hours period.

This all led to Ethereum advocates, supported by a daily trading volume of $330 million, to cheer at community forums for the upcoming “Flippening” – the moment that Ethereum overtakes the place of Bitcoin in the world. They point to the technological and governance problems holding back Bitcoin from being used as an efficient payment system and to the many new solutions that are based on Ethereum coming out every day.