Crypto markets are taking a beating this weekend, extending losses after breaking through their last 2014 support levels late last week.

The losses are taking on an August-like character following a month of relative quiet and even some hope of a recovery.

Bitcoin on BTC-e hit a low of $370 on BTC-e 48h ago. After retracing to $414, it resumed its slide and its currently trading at $379. As previously assessed, the breaking of the $460 support level carried significant implications. Once the final 2014 barrier in the low 400’s was breached, further losses were probable. 20% has been shed since breaking through $460.

And unlike the sudden dips below $400 experienced in April and August, which quickly reversed in highly unsettled trade, this decline has been more gradual. Apparently, it has not been accelerated by compounding factors like heavy panic selling or margin calls, suggesting that these prices may be around to stay for some time. 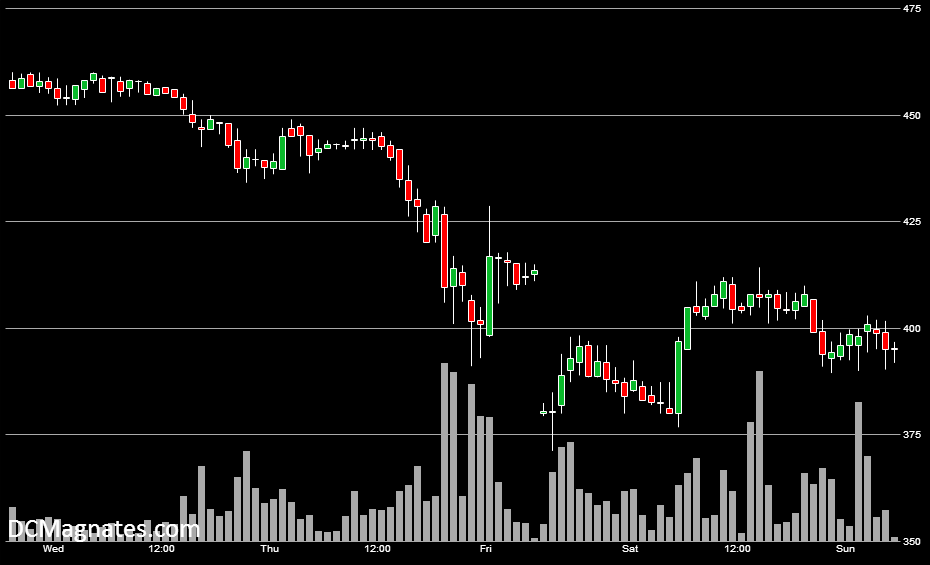 Litecoin fell as low as $3.91 on BTC-e and is now trading at $4.09. It has exhibited a bizarre blend of both correlating and independent behavior relative to BTC. LTC/BTC initially spiked to 0.0115, since when BTC sustained initial losses, LTC declined negligibly. LTC then followed suit, losing 13% to 0.010, then retracing to 0.0108.

It could have been a lot worse for Litecoin, which usually amplifies BTC movements, particularly to the downside in recent times. It has only lost 18% since BTC breached $460, thus resulting in a relatively respectable LTC/BTC ratio.

Peercoin (PPC) has been highly volatile, seemingly unsure whether to follow its crypto-peers on the way down or adhere to its recent rally to above 40 mBTC. After reaching this high, PPC lost nearly 40%- only to gain most of it back. The behavior is ironic as the rise was attributed to a new project to bring stability to crypto prices.

The spread between BTC-e and Bitstamp has widened to $17 (4.25 %), well above typical levels but in line with a growing trend during declines.

For both BTC and LTC, we’re seeing a worrying recurrence of revisitation to outlandish levels reached during flash crashes even under regular trading conditions, where such prices are becoming the new norm.

With November coming, we’re also approaching a point where 1-year returns on BTC will turn negative. Last November, BTC skyrocketed multifold from $200 to over $1000.