ChronoBank, a blockchain-based initiative aimed at disrupting the short-term recruitment sector, has already raised just over $4 million in cryptocurrency with its crowdfund which will end in only one week. It recently reached two new partnerships both in the employment and cryptocurrency spaces.

ChronoBank has established a strategic partnership with Instahire, a team that is launching an app to expedite the recruitment process. Instahire is associated with the Clifford Wallace Agency, which supplies hospitality staffing to corporate events and restaurants and receives around 1,000 job applications per month. ChronoBank’s team met with representatives from Instahire last week to discuss the possibility of a partnership between the two organisations. They say that both immediately saw the potential opportunities.

Instahire will launch in February 2017, first locally in Sydney and then to Australia in its entirety. The app is currently in the final stages of testing, ahead of first release, and hospitality businesses are actively being sought and added to the list. The immediate synergy for ChronoBank is to help grow the number of pre-registrations for both jobseekers and businesses.

Once the Instahire app is up and running with sufficient numbers of employers and employees, it will make sense to introduce the LH currency used on the ChronoBank platform. As an added incentive, the team are discussing the possibility of offering a free ChronoBank debit card with $20 credit for every new registered user, charging a 2% wage transfer fee.

ChronoBank has also partnered with the NEM cryptocurrency platform to create a separate wallet for the NEM ecosystem. ChronoBank will also issue Labour Hour (LH) tokens on the NEM network and use on-chain multi-sig, one of NEM’s flagship security features. 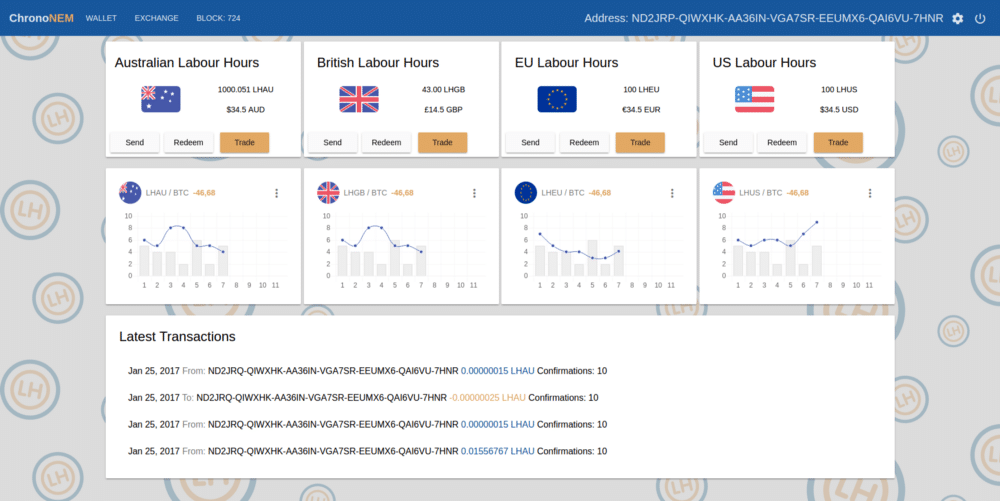 NEM (New Economy Movement) was originally conceived as a clone of the Nxt blockchain, but rapidly developed into a completely new project with its own codebase. Its ecosystem has since grown with a market cap of around $60 million now, placing it in the top 10 of all cryptocurrencies.

“It is important for us to deploy tokens on several blockchains,” comments Sergei Sergienko, CEO of ChronoBank. “This builds in redundancy and broadens our appeal across many initiatives and communities.”

LH will leverage NEM’s token asset facility that enables businesses to create blockchain tokens with specific properties and identifiers. “The flexibility and ease of use of this system is highly appealing to us,’ continues Sergienko. ‘NEM’s developers have designed a powerful but nevertheless intuitive approach to token operations.”

Aside from issuing tokens on the NEM network, ChronoBank is creating a dedicated wallet for the NEM blockchain. This will incorporate another powerful feature of the NEM blockchain: on-chain multi-signature transactions. Up to 32 signatories can be required to sign a transaction and, uniquely to NEM, signatures are propagated across the blockchain as soon as they are created. The developers explain that this means further signatories do not have to worry about an aggregating server going offline – there is no single point of failure.

Share this article
Tags: crowdfunding / cryptocurrency
Got a news tip? Let Us Know