BTC/USD’s bounce has found legs, roaring back to the $400 mark on BTC-e. It has not traded above this psychologically significant level since September 23, when news of PayPal’s partial acceptance of Bitcoin sent it as high as $450.

That pop was short lived. In a trajectory obviously indicating over-hyped news, the pair gravitated back to below $400 and then proceeded into one of its worst slumps this year. Falling as low as $285 on BTC-e- a new 2014 low- there was an uptick in talk of an all-out crash and of investors losing hope.

Since discovering some support around $325 last week, however, investors have piled back in. BTC added as much as 43% from its $285 trough, a lucrative but not-too-uncommon return during volatile rounds of crypto trading. It hit a high of $408 12h ago, and is now trading at $402.

The momentum of the 1-week rally reinforces theories that the big drop was catalyzed by early investors dumping their holdings in an uncontrolled and nonstrategic fashion, perhaps triggered by prices crossing a stop point. Cheap coins were then snapped up by investors, resetting equilibrium. 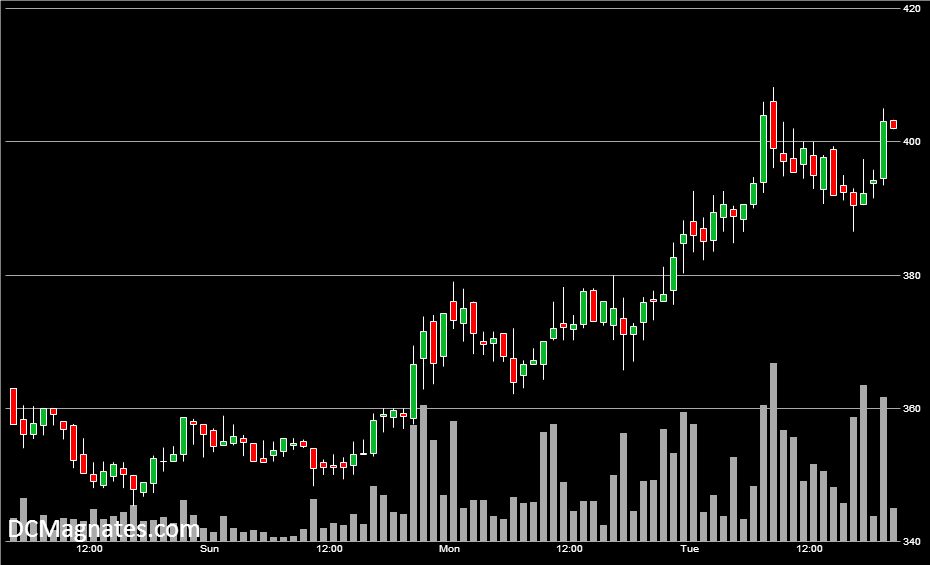 The question now becomes if the rally was nothing more than a bounce, retracing 75% of losses, which are soon to be resumed. Or if the dramatic drop- which unlike the flash crashes, dragged on for an extended period- in fact signifies a critical point of long-term reversal. BTC is still off by 60% year-to-date and remains 20% below its 200-day moving average, now down to $507.

If/when the price retraces back to below $400, a solid support range of $350-$370, held for an extended period, needs to be established in order for a grander recovery to take shape. If not, one bears in mind that there is little support between current levels and $200.